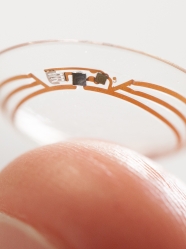 The technology giant, Google recently announced that it is working to develop a contact lens that could non-invasively monitor glucose levels from tears. The smart contact lens team at Google has put together the existing electrochemical technology of a continuous glucose monitor (CGM), a soft contact lens, a chip (about the size of a piece of glitter), and an embedded antenna. Google is now testing prototypes that can generate a reading once per second and would, as planned, not need calibration. Though the device is in its early days and not close to coming to market, some clinical trials have been done, and the team has recently spoken with the FDA. The smart contact lens project clearly falls alongside other hugely ambitious projects that the company’s top-secret research arm, Google[x], is working on: a self-driving car, balloon-powered Internet, Google Glass, and affordable wind power. The smart contact lens is the fifth Google[x] project ever – with the x indicating that Google believes the technology could be ten times better than what is currently available, as we understand it. Wow! Even if they may not get there, it is a giant statement that Google is taking on diabetes. 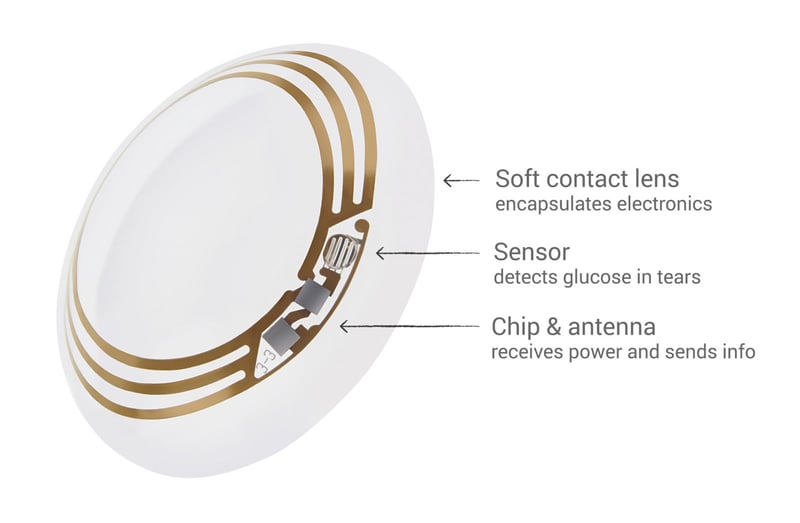 Monitoring glucose non-invasively is not new in diabetes. A number of companies over the years have tried similar projects – C8 MediSensors, FoviOptics, SpectRX – though none has succeeded commercially. Historically, isolating glucose molecules with sensors has been impossible to do in either a practical or affordable way. We know Google[x] can learn from others in the field as well - academics, researchers, executives, and patients alike.

Dr. Brian Otis, the project co-leader at Google[x] (along with Babak Parviz), explained some of the specific barriers to monitoring glucose in tears. First, glucose levels in tears are five to ten times lower than concentrations found in blood, which means detection must be more sensitive. Second, methods that involve collecting tears often contain artifacts from using capillaries. Glucose readings from tears have a slight lag compared to direct blood samples, although the research team expects that the lag will not have be significant in a real-world setting. There are also concerns that contact lenses could be uncomfortable or difficult to wear. Historically, continuous glucose sensor development has had to balance many other factors: the size of electronics, power/battery constraints, the need for an antenna to send the information to a receiver, on-body comfort, and more. 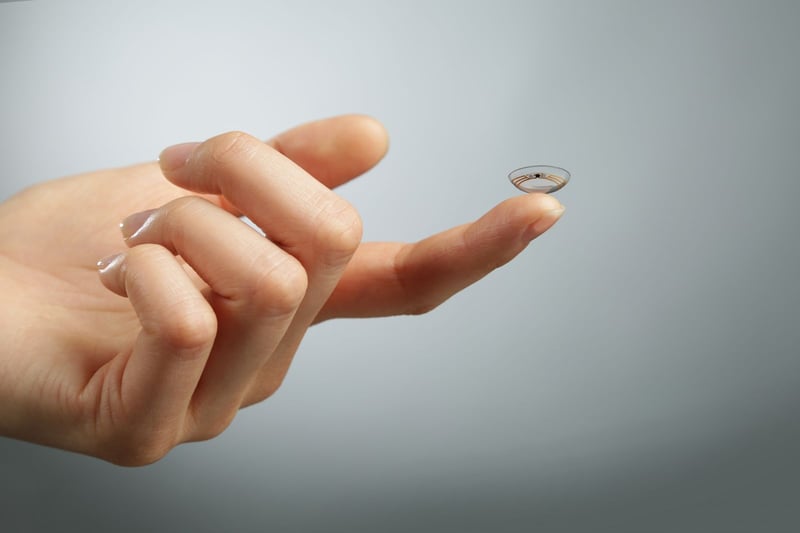 Other leaders in the diabetes arena have also been working on initiatives to make blood glucose monitoring easier, less invasive, and more intuitive. Dexcom has a long-term goal of eliminating fingersticks through a more accurate, factory-calibrated CGM sensors. In the short-term, Dexcom is hard at work on Share (a remote monitoring system currently under FDA review) and its Gen 5 mobile platform (CGM data straight to the smartphone). Meanwhile, Abbott Diabetes Care is developing the Flash Glucose Monitoring System, which will involve use of a glucose sensor worn under the skin (like current CGM) for up to 14 days and a wireless touchscreen reader device. A patch worn over the sensor will be silver dollar-sized and about a finger-width thick. Users will scan the touchscreen reader over the sensor patch to get their real-time sensor glucose value, a glucose trend arrow, and a trend graph showing the last eight hours. The system will be calibrated at the factory, meaning users will not need to enter any fingerstick values for calibration. Exciting times ahead in glucose monitoring!

On an inspiring note, given Google’s resources to move the field of diabetes forward, the Google[x] team made it clear it is by no means planning to do this project alone. The company is looking to partner with other companies and people who have experience bringing medical technologies to the market. The hope is for others to use the smart contact lens technology and develop apps that would make measurements available to patients (e.g., on a smartphone or a receiver) and to their health care providers (e.g., in an electronic health record). A potential feature may be in the works to add a small LED light to the contacts that signal when glucose levels are too high or low, and would be seen only by the wearer. One major question is how to produce this device at a reasonable cost, since the lenses would not last forever; we do think Google could subsidize continued R&D in a significant way should companies decide they would like to pursue this.

To be sure, the talent at Google is renowned - Dr. Otis has a killer bio (for example, he used to run a chip design research lab and has worked at Intel Corp. and Agilent Technologies) and we found him at once humble as well as inspiring in our interview with him. As we understand it, Google has also been quietly building its internal team with smart hires, with “not just process engineers, but research chemists" who can really bring understanding of how to move this project forward.

For those worried about where the data would go, Joseph Lorezo Hall, chief technologist at the Center for Democracy and Technology was briefed on the project before it went public. In a Washington Post article, he said he was assured that the data would never hit Google's servers. We're glad to hear that Google is treating this sensitively, although aggregated data could actually be a positive way to measure the diabetes status of the public using the device. No doubt, education on what to do with all the numbers will be something that Google[x] will work on in partnership.

Big picture, a non-invasive method of measuring glucose has the potential to improve the ease and frequency of monitoring, avoid the use of needles, and harness technology to improve the lives of people with diabetes. Although the Google[x] device is still very much a prototype in its early stages, we feel confident that Google could drive forward very valuable thinking in diabetes. With the company’s massive reach, we are very excited about the ability it has to bolster what the diabetes ecosystem can achieve for patients. The smart contact lenses have already attracted some major attention, with great coverage from the BBC (that includes a video of the lenses), NPR, and the Telegraph.

Google’s move into healthcare is a major statement by the technology giant; notably, diabetes is its first healthcare focus with this fifth moonshot! We cannot wait to watch more and learn. In the meantime, we hope the diabetes field will look to share its brainpower with Google… sometimes one plus one is not just two – it could be ten! As Google[x]'s Dr. Otis says "We're actively looking for partners to help us out..." -NL/KC/AB