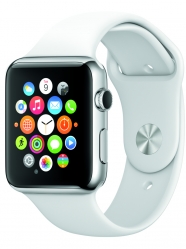 On September 9, Apple unveiled its first-ever smart watch. There had been speculation that this watch would have glucose-monitoring capabilities, but unsurprisingly, this feature is not available in the first-generation of the watch. A last minute bug also prevented Apple from revealing any glucose applications for its new Health app or any integration with diabetes devices. However, we have heard that Apple does intend to work in diabetes for future iterations of its products – this would be very positive, as tech giants such as Apple can bring fresh ideas and designs to diabetes management (and perhaps, make it more fun). Google and Novartis, for instance, are working together on glucose-monitoring contact lenses.

The Apple Watch features several nifty health and fitness applications to help monitor day-to-day activity. The watch can track calories burned, time spent exercising, time spent standing versus sitting, and distance traveled by connecting to the user’s iPhone GPS system. The watch requires an Apple iPhone to work. Apple’s video of the watch’s fitness aspects also provides a nice summary of its features. Hopefully, the watch will get people who aren’t typically focused on fitness to take simple steps in improving their physical activity. The watches will become available in early 2015 at a starting retail price of $349, an increase from simpler activity trackers like Fitbit (starting at $59.95) or Jawbone (starting at $79.99). –AJW/AB