JAMA Paper Breaks Down Medical Research Funding in the US

By Kelly Close and the diaTribe team

The Journal of the American Medical Association (JAMA) recently published a “Special Communication” paper titled “The Anatomy of Medical Research,” analyzing medical research funding worldwide between 1994 and 2012. The paper is one of the first and largest of its kind to examine medical research spending on a global scale, and its results identify some key problem areas in the way the US is focusing its research dollars. Namely, it points to the fact that diabetes and chronic illnesses are largely underfunded compared to other disease areas. These findings are described below.

The article points out that public funding of medical research does not fully correlate with disease burden. On a large scale, a set of 27 diseases (including diabetes) that account for 84% of deaths in the US receive less than half (48%) of NIH funding. The article’s authors indicate that cancer and HIV/AIDS have received a disproportionately large amount of this investment, while chronic diseases like diabetes and obesity have received less funding relative to the costs they impose on society.

In 2012, cancer accounted for $5.6 billion (roughly 16%) of total NIH funding, HIV/AIDS accounted for $3.1 billion (roughly 9%) of total NIH funding, and diabetes accounted for $1.1 billion (roughly 3%) of total NIH funding (Figure 1), a much lower figure than we would have expected, considering the number of patients dealing with each condition. According to the CDC, there are roughly 1.2 million people in the US with HIV/AIDS and 13.4 million people alive with a history of cancer (either past or current), compared to over 29 million people living with diabetes (Figure 2). By that comparison, the NIH spends about $2,583 each year per person with HIV/AIDS, $418 each year per person with cancer, and only $38 each year per person with diabetes (Figure 3). Indeed, as the American Diabetes Association stated in a recent press release, “Diabetes kills more Americans each year than breast cancer and HIV/AIDS combined with no sign that these odds are improving. Twice as many Americans have diabetes as have cancer and diabetes is 20 times more prevalent than HIV/AIDS.” (Not to mention the number of people with prediabetes who are at high risk...). Of course, the above statistics do not reflect other critical components of disease burden such as quality of life, life expectancy, and many others, but they do provide a significant point of reflection on how our medical system spends its research dollars. 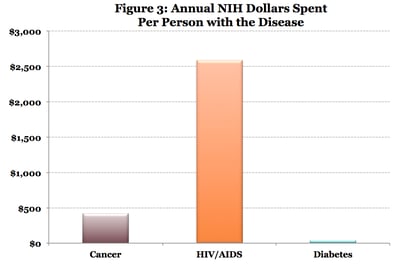 While government and other private and public sources seem to largely underfund diabetes and other chronic illnesses, the paper did highlight diabetes’ tremendous funding support from charities and foundations. The JDRF and the American Diabetes Association (ADA) were ranked as top grant awarding charities, ranked #2 and #6, respectively. For context, the American Cancer Society was #1, the American Heart Association was #2, and the Susan G. Komen Breast Cancer Foundation was #4.  Additionally, the Helmsley Charitable Trust was ranked #5 on the list of top private foundations. These and other organizations have been integral to so many of the innovations and breakthroughs made in diabetes research, and we as a community are fortunate to have their support in areas where government funding has sometimes been lacking.

Given President Obama’s 2015 State of the Union speech, in which he mentioned a new Precision Medicine Initiative “to bring us closer to curing diseases like cancer and diabetes,” we hope that there may be increased government funding for diabetes and other chronic diseases. The Special Diabetes Program created by US Congress has been an amazing effort on that front, funding $150 million/year for type 1 diabetes research. (Though it’s stressful each year to bite our nails until we hear that the funding will come through. Why does the conversation need to take place every year!”) As the JAMA paper points out, diabetes is a field with so much potential for scientific discoveries, yet one that has not received as much attention as it should – in our view, that’s largely because there are disincentives already in place (long regulatory cycle, worsening reimbursement, etc.). Of course, the goal is not just that diabetes receives more money, it’s that the money going into diabetes be used in an ever smarter and more efficient manner. Recent estimates put the US’s annual direct spending on diabetes at $176 billion – how could our community eliminate waste and better spend the resources we already have?