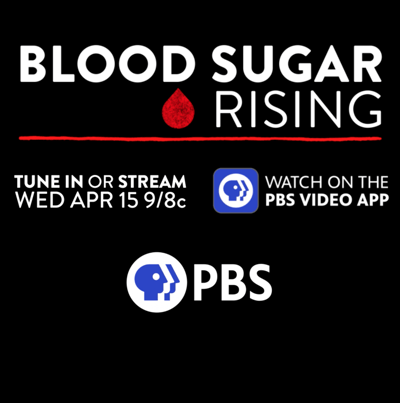 For any filmmaker, author, or artist, diabetes is tricky to tackle. The disease has become an epidemic, with immense physical and financial costs to people with diabetes and rising burdens on health systems. At the same time, treatments and therapies have improved dramatically, as we now have more effective drugs and high-tech devices as well as a deeper understanding of exercise and diet.

So, if you’re an artist and want a strong point of view, you have to decide: is the glass half full or half empty?

It’s clear how David Alvarado has decided. He has written and directed an outstanding documentary on diabetes – the best I’ve seen – called “Blood Sugar Rising,” which will be aired on PBS on April 15. If you are looking for something inspirational, however, you’re better off watching Disney.

To be sure, “Blood Sugar Rising” has heroic figures, including people with diabetes themselves as well as health care professionals, researchers, and community leaders. In tracing the stories of a half dozen principal characters, the documentary does emit slivers of hope.

But “Blood Sugar Rising” is mostly an unsparing account of the physical and emotional toll of diabetes.

I’ve written extensively about diabetes complications, including amputations of extremities, but I’ve never actually seen what an infected toe looks like, disfigured and at risk of amputation, due to diabetes. Now, thanks to “Blood Sugar Rising,” I’ve seen it, up close.

The person with the infected toe, Monteil, is only 36, but his doctor explains the risks to anyone with diabetes:

Alvarado’s objective is to shake a complacent country and make it understand how serious this crisis is. Almost two hours long, the documentary relies on experts – including Kelly Close, the founder and editor-in-chief of diaTribe– to provide historical and medical context. We learn that a generation ago, fewer than three percent of Americans had diabetes. Now it’s almost ten percent, and by 2025, one-half of the U.S. population is predicted to have diabetes or pre-diabetes.

While the data are jarring, the real strength of “Blood Sugar Rising” is the compelling personal stories of those individuals who are profiled. Finding the right people to carry a story – those who are comfortable before a camera and are willing to bare their soul – is the toughest part of such a project. Alvarado deserves credit for finding those people and ensuring that they essentially represent the entire map of America: urban, suburban, and rural; white, black, Latino, and Asian; old and young; type 1 and type 2.

There is the 35-year-old woman who, after years of neglecting her diabetes, is now desperately searching for a life-saving transplant of her kidneys and her pancreas. There is the community health worker in Appalachia who is trying to teach her friends and neighbors about the perils of Mountain Dew and other sweet beverages. There is the bio-medical engineer at Boston University who is trying to develop an artificial pancreas for his type 1 son before he heads off to college. 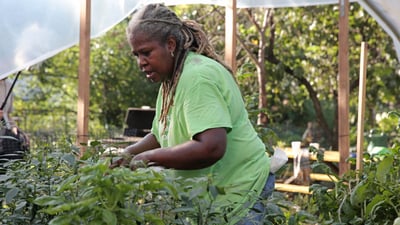 And there is Karen Washington, a middle-aged woman in the Bronx, whose brother died of complications from type 2 diabetes and who has now grown an urban farm to teach children about healthy foods. She notes that affluent communities, unlike hers, have access to fresh fruits and vegetables. “The question is, why?” she said. “Why does it have to be like that? . . . Why is it that supermarkets don’t want to come into low-income neighborhoods?”

“Blood Sugar Rising” raises many difficult questions, and there are few answers. The most heartbreaking segment focuses on a young man named Alec, who, upon turning 26, was no longer covered by his parents’ insurance. When he went to the pharmacy to buy his insulin, it now cost him $1,300. Unable to afford it, Alec decided to ration what insulin he had left. He’d only had type 1 for two years and was presumably unaware of how much danger he was in. He also didn’t want to ask his parents for money. He soon went into diabetic ketoacidosis (DKA) and died.

Alec’s parents took his ashes and spread them on the grounds of the Eli Lilly headquarters in Indianapolis, Indiana.

“Blood Sugar Rising” has its uplifting moments, such as “poet mentors” in the San Francisco Bay Area, who are part of a larger program to improve the community’s health and food accessibility. But those hopeful glimmers are often overwhelmed by the scope and complexity of the epidemic. Food, for example, is so deeply entrenched in our culture, in our religious and social gatherings, that to not serve and consume large portions is nearly heresy. And while low-income communities suffer from a lack of healthy foods, affluent communities have a different problem: their supermarkets aisles are glycemic hellscapes of cereals, chips, packaged pastries and many other high-carb, processed items.

Even the stories with happy endings are harrowing. The journalist Dan Hurley, who has type 1 diabetes and has written a book on it, described a low-blood sugar experience: “One time I was alone with my daughter, and she was about 8-years-old, and she found me sweating profusely and unable to come to. And she realized something was very, very wrong with me. She didn’t know what she was supposed to do. She knew I needed something sweet. So, she went into the kitchen and got Marshmallow Fluff, and began spooning it into my mouth, and she saved my life.”

“Blood Sugar Rising” is telling America to start paying attention, now, before much of the country is at such risk.