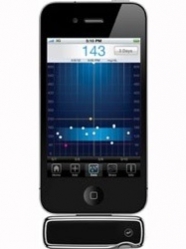 The consumer marketplace has a long history of inventions that combine two or more products – things like the spork, premixed peanut butter and jelly, and the clock radio. In these cases, the combination is often greater than the sum of the parts. In diabetes, the insulin pen did this for syringes and vials, and down the road, the artificial pancreas will hopefully do this for CGM and insulin pumps. This month, we had the opportunity to test drive the newest combination product in diabetes: Sanofi/AgaMatrix’s iBGStar, the first blood glucose meter that connects directly to the iPhone and iPod touch.

We last wrote about the iBGStar when it was cleared by FDA in December 2011 (see new now next in diaTribe #39), and this month’s US-wide launch of the meter gave us the chance to give it a try for the first time. As a reminder, the iBGStar blood glucose meter is about the size of a USB memory stick (2.2 in x 0.9 in x 0.4 in) – very small! – and attaches to an iPhone or iPod touch through a built-in dock connector (i.e., no cords or cables are needed to plug it in to an iPhone or iPod touch). When the iBGStar is plugged directly into the Apple device and a person tests his or her blood sugar, the screen displays the test result using the iBGStar Diabetes Manager App (a free download in the iTunes App Store). The iBGStar also has a small screen on the device itself, meaning it can be used to test glucose levels as a standalone meter independent of an iPhone or iPod touch.

In my view, a major highlight of the iBGStar is that it improves and simplifies the whole experience of blood glucose testing, from downloading the App to viewing results to sharing them with a healthcare provider. After taking the iBGStar out of the box and plugging it into an iPhone, I was immediately prompted to download the Diabetes Manager App. Compared to many other diabetes software programs I’ve installed, this was refreshingly quick and hassle- free.

Checking blood glucose on the iBGStar – whether plugged into an Apple device or using the standalone meter (see below) – was also straightforward. When plugged into an iPhone or iPod touch (regardless of what I was doing on the device), the phone instantly recognized an inserted strip, opened the App, and automatically played an animation video demonstrating proper sample application technique. After a short wait for the six-second test time (accompanied by another animation – it actually counts to three, making the time seem closer to three seconds), the result was displayed in large, readable font on the Diabetes Manager App.

I was able to learn and navigate through the App within a few minutes of booting it up, something I sort of take for granted in a world increasingly full of intuitive touchscreen technology. The App has clearly marked sections for entering data (carb, insulin, and manual blood glucose entry), reviewing statistics and charts, as well as easily sharing results via email. Color-coding was also nicely incorporated: orange for hyperglycemia, blue for in-zone, and fuchsia for hypoglycemia (no red or green to be found!). This feature really shone in the data menu, where the glucose values could be viewed over time in a scrollable chart. The graphical display – with colors to differentiate high or low glucose values – made it especially easy to spot areas where hypoglycemic or hyperglycemic values clustered.

The App also simplified information gathering by auto-tagging results based on the time of day. As someone that generally avoids all forms of manual data entry, I definitely appreciated this automation. After pre-setting my meal times (e.g., Breakfast: 8-10 am, Lunch: 12-2 pm, etc.), the App automatically tagged my results appropriately: Post-Breakfast, Pre-Dinner, etc. When an auto-tag was not applicable due to a different mealtime, changing it took just a couple taps. The array of “notes” that could be added to a result was also quite comprehensive – everything from “air bubble” to “fatty meal” to “light exercise” was already in the app, with the additional capability to add my own customized notes. Notes still required manual entry (meters cannot read minds yet!), but I liked that the iBGStar seemed to simplify the process as much as possible.

testing without an iPhone/iPod touch

As previously mentioned, the iBGStar also works as a standalone meter when it’s not plugged into an iPhone or iPod touch. Testing in this way is akin to using a standard blood glucose meter: insert the strip, apply blood, wait for the countdown, view the result on the meter’s screen. The iBGStar as a standalone meter can store up to 300 results, which are automatically uploaded to the Diabetes Manager App the next time it is plugged into an iPhone or iPod touch.

The compact size of iBGStar was what immediately stood out when testing without an Apple device. This is easily the smallest meter I’ve ever used (2.2 in x 0.9 in x 0.4 in), and I appreciated that it looks like a high-tech consumer electronic rather than a more utilitarian medical device. The iBGStar also comes with a small cover/clip that hooks on to the built-in dock connecter, a nice way to avoid carrying the clunkier, all-in-one zipper case (though the case is definitely smaller than a typical blood glucose monitoring case). The meter’s battery charges when plugged into the iPhone or iPod touch or through a micro-USB port on the bottom of the device.

The downside to using the iBGStar as a standalone meter is the screen. The font is quite small and the backlight is low – this device was really designed to be used with an iPhone or iPod touch, and the standalone feature seems more for convenience rather than optimal use. We understand this also helped for regulatory purposes. I did not find that the iBGStar unacceptably drained iPhone or iPod touch battery life.

The meter uses BGStar strips, which based on the data reported to the FDA, are comparable in accuracy to other new strips and meters we’ve recently tested (see comparison table below or test drive in diaTribe #41 for our review of the LifeScan OneTouch VerioIQ, the Abbott FreeStyle InsuLinx, and the Telcare meter). The iBGStar strips’ sample window and blood drawing action were not quite as impressive as the new OneTouch Verio strips or the FreeStyle Lite strips – those are great! - but I did not find it significantly worse.

pricing and where to get iBGStar

You can get iBGStar at Walgreens and at Walgreens.com ($74.99 and includes 10 test strips), at Apple retail stores (!) and at Apple.com ($99.95 and includes 50 test strips), and through Diabetic Care Services & Pharmacy ($71.99 and includes 10 test strips). If you prefer to get iBGStar at your local non-Walgreens pharmacy, they can also probably get it for you but it depends on their distributors. The BGStar strips are priced similarly to other major strip brands (Walgreens.com retail price of $64.99 for 50 strips). Notably, Sanofi is offering a co-pay savings program to limit out-of-pocket expenses to no more than $20 per purchase for one year, though certain restrictions may apply.

In thinking about the three new meters we recently reviewed (see test drive in diaTribe #41) and now Sanofi’s iBGStar, it’s refreshing to see a healthy level of competition and innovation in blood glucose monitoring. For too long the data have often been hard to download, analyze, contextualize, and visualize, especially for on-the-go decision-making. In my view, this is one place where recent meters have made important strides. Managing diabetes is unquestionably challenging and frustrating, but it’s made even worse when the data we laboriously collect do nothing to ease the burden. I have no doubt that this is changing for the better.