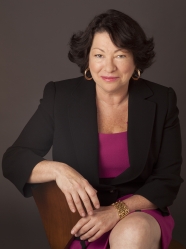 She stood up to sing at Sunday Mass when the music suddenly seemed distant and the stained glass windows turned yellow. Then everything went black. The 7-year-old girl collapsed, not waking up until she lay on the tile floor in the sacristy, shivering cold from the water splashed on her face. Her mother drove her to Prospect Hospital in the Bronx, where a lab technician tied a rubber tube around her arm and, seeking to draw blood, flashed a large syringe with a needle sliced at the end. The girl screamed, bolted out of the room, and raced into the street.

“Catch her!” someone yelled.

Sonia Sotomayor dove beneath a parked car and scrunched up like a turtle. A hospital employee finally caught her by the foot and dragged her back into the building, with Sonia fighting him every step of the way.

Sonia’s diabetes was diagnosed that day. It was the first time she had ever seen her mother cry.

The year was 1962, and the vignette opens Sotomayor’s memoir, My Beloved World, the surprise blockbuster nonfiction book of the year. Named to the U.S. Supreme Court in 2009, Sotomayor has been rightfully praised as a pioneer: the High Court’s first Hispanic justice, its third female justice – and its first justice with type 1 diabetes. Though her medical condition is not always front and center in the book, it is a powerful narrative thread to her life story, a cause of anguish but also a source of motivation and ultimately triumph.

A Cloaked Figure No More

Sotomayor’s memoir is an anomaly. With few exceptions, Supreme Court justices are cloaked figures, in every sense. They grant few interviews, make few widely publicized speeches, and rarely write books outside of their legal expertise. They allow their persona to be shaped by their written decisions from the bench – which are momentous to be sure, revealing their judicial philosophy but disclosing little about their backgrounds, sensibilities, and inner lives.

Into that void steps My Beloved World, which on one level is an uplifting if familiar rags-to-riches tale: the Puerto Rican girl from the crime-ridden housing projects of the Bronx who has an alcoholic father and an overbearing mother, she navigates her way through Princeton and Yale Law School, then flourishes as a prosecutor, a corporate lawyer, and a federal judge, overcoming discrimination as a woman and a Hispanic, before ending up on the Supreme Court.

It’s a good yarn well told (Sotomayor collaborated with Zara Houshmand, an Iranian-American poet), and the publisher, Alfred A. Knopf, reportedly paid over $1 million for the book, so expectations were high. But its wild success – as of this writing, four consecutive weeks as the New York Times’ No. 1 nonfiction book – can be explained by Sotomayor’s remarkably candid account of her own frailties: her pudgy nose and lack of style, fashion, and classic good looks; her failed marriage; her academic and professional insecurities; her weakness for rich foods and for nicotine (for many years she smoked 3 ½ packs of cigarettes a day – a day! – but has now quit).

Sotomayor is drawing huge crowds at book signings, and why not? She is the antithesis of the detached Olympian jurist who hurls thunderbolt decisions from the highest mount in the land. That, she can do, but she is also a 58-year-old single Hispanic woman who has struggled with her weight, her parents, her love life, and her health to achieve the American Dream. She is an inspiration, but she is one of us.

It is no accident that the book begins with Sonia’s collapsing in church from her diabetes. It serves as the foundational event of her life. Her father couldn’t give Sonia her insulin injections because his hands trembled. She realized, at age 7, that she had to do it herself. But in 1962, that meant she had to learn how to light her family’s gas stove, fill a pot with water, and boil glass syringes before taking the shot. Throughout her childhood, she took one injection a day, before breakfast, though she managed her time efficiently: while the water boiled, she got dressed, brushed her teeth, and got ready for school.

“I probably learned more self-discipline from living with diabetes than I ever did from the Sisters of Charity,” she writes.

The first chapter ends with Sonia giving herself her first shot, and while her diabetes recedes from the story, its importance is clear. Her family, prone to superstition, believed that Sonia was doomed (an aunt told her that she could die if she ate mangoes), and Sonia herself realized that her long-term prospects – given diabetes care in the 1960s – were not good. But she turns that into a motivational spur.

“I wasn’t going to live as long as most people, I figured,” she writes. “So I couldn’t afford to waste time. Once in school, I would never contemplate taking a semester or a year off. Later might never come, so I’d better get to work right now. That urgency has always stayed with me, even as the threat has receded.”

At a doctor’s appointment, she read a pamphlet about professions that were forbidden for diabetic adults and was mortified that she could not become a police officer. A fan of Nancy Drew, young Sonia fancied herself a detective, but that career path was suddenly cut off. It was a cruel blow. But she also liked Perry Mason, the show’s lawyers and the judge, and the courtroom had no rules against those with diabetes. A new career was found.

Sotomayor writes of several hypoglycemic episodes and also drops in a few of the mundane-comical irritants of the disease. On her wedding day, for example, she was fully dressed when she realized she had not eaten anything before the ceremony. She took her shot and woofed down a turkey sandwich, with a roomful of women screaming at her not to get mustard on her dress.

She married in her early twenties, which led to fears about having children. The prospect terrified her mother, and while Sotomayor loves kids, she too was anxious. “The incidence of maternal complications was sobering,” she writes. She never had children. Her diabetes wasn’t the only reason, but it was instrumental.

A Rough and Tumble Career Path

Sotomayor describes in detail the intense pressures of an ambitious student and lawyer. As a beneficiary of affirmative action, she faced skeptics who believed her collegiate path was paved with favoritism, even though she graduated summa cum laude from both Princeton and Yale Law School. At her first job, as an assistant district attorney in New York County, she prosecuted criminals from the rough-and-tumble world from which she herself was a product. As a lawyer for a corporate law firm, she was described by a colleague as “one tough bitch,” a characterization that shook her but reflected the steely resolve she required to succeed.

Her ambition was so consuming, the demands so great, it is easy to see how her health would be secondary. For 23 years she only took one shot a day, long after “best practices” called for two. Not until she was 30 years old did she reach out to a diabetes specialist who put her on two shots and “improved forms of insulin,” and she used her first glucose meter in the “mid-1980s” – several years after they had come into vogue. She tried to manage her control for more than two decades by testing her urine. She now tests her blood sugar five or six times a day, while taking that many injections a day as well.

She counts carbs and exercises, but like most people with type 1 diabetes, she’s had close calls.

At a wedding in Venice, she passed out in her hotel room. Luckily, a friend found her, and she was carried on a “Venetian stretcher” – a chair on poles – to a nursing home for medical treatment. “The bald truth is,” she writes, “is that if [my friend] had not been aware of my diabetes, I’d be dead.”

It was a turning point in her life. She had typically concealed her diabetes, but she realized that was dangerous, and secrecy in general creates undue stress for patients, particularly diabetic children who often feel shame or embarrassment. But it is not just the kids: Very few public figures with diabetes, type 1 or type 2, openly discuss their condition. The stigma remains. I am aware of no one in the history of Congress, let alone the Supreme Court, ever acknowledging having the disease.

That Sotomayor does so, with detail and nuance, is an act of courage. “I don’t know if they still give diabetic children a list of professions they can’t aspire to,” she writes, “but I’m proud to offer living proof that big dreams are not out of bounds.”

And she finds a way to turn something that could have been debilitating into a springboard for service and accomplishment.

“I live most of my life inescapably aware that it is precious and finite,” she writes. “The reality of diabetes always lurked in the back of my mind, and early on I accepted the probability that I would die young. There was no point fretting about it; I have never worried about what I can’t control. But nor could I waste what time I had; some inner metronome has continued to set a beat I am unable to refuse. Now diabetes has become more manageable, and I no longer fear falling short in the tally of years. But the habit of living as if in the shadow of death has remained with me, and I consider that, too, a gift.”

That she has shared that gift so widely is the blessing of My Beloved World.