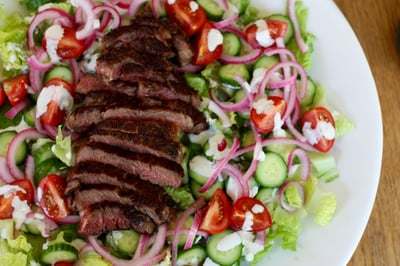 If you’re feeding folks who are skeptical about the whole concept of salad as dinner (“What are we — rabbits?” these people might say, annoyingly), then you might think of this as a kind of gateway recipe. It is really hard to argue with steak. And it is really hard to argue with blue cheese dressing. Plus, I’ve served this to my 19-year-old son and not even caught him an hour later eating what he refers to as “second dinner.” That’s how satisfying it is. And leftover dressing — which you will have — makes a great dip for raw vegetables or a perfect topping for sliced tomatoes.

1 ½ teaspoons kosher salt (or half as much table salt)

6 or so cups of chopped romaine or iceberg lettuce

4 Persian cucumbers (the small ones) sliced, or 1 plastic-wrapped cucumber, peeled, and thinly sliced

1. Season the steak heavily with salt (3/4 teaspoon per side—trust me on this) and grill it on high for 4 or 5 minutes a side for medium rare, or until done to your liking, then rest it on a cutting board while you prepare the rest of the salad. (If you prefer, you can pan fry the steak over medium-high heat in a very hot pan (cast-iron skillet preferred), for around 5 minutes a side.)

2. To assemble the salad, arrange the lettuce in a wide, shallow dish or on a large platter and dress it lightly. Then place the cucumbers, tomatoes, and onions over the lettuce and pour a bit more dressing over all.

3. Thinly slice the steak across the grain, arrange it in the center of the salad, and serve.

In a blender or food processor, or with a hand blender, whir together 1 cup crumbled blue cheese, such as Maytag, Danish, or Gorgonzola, 1 cup mayonnaise (I use full-fat Best Foods or Hellmann's), 1/2 cup buttermilk, 1 tablespoon white or white wine vinegar, and freshly ground black pepper to taste. Thin with more buttermilk as desired, taste for salt (add some if it needs it) and serve. There will be leftover dressing, which will keep in the refrigerator for around a week.