The Stigma Around Switching to Medicaid 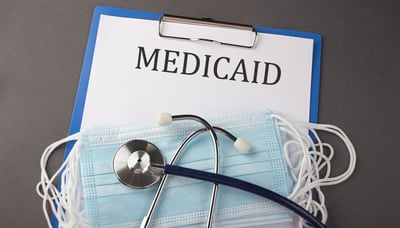 Switching from private to public health insurance can be complicated – from the application process, to knowing your income eligibility, to dealing with negative stigma around plans like Medicaid. Here’s what you need to know to ease the transition.

Health care in the United States is unique. Our system of largely privatized medicine and access to health care is expensive and can be complex to navigate, especially if you live with a chronic condition like diabetes.

In fact, the United States is the only country in the developed world without a system of universal health care, leaving some 30 million Americans uninsured.

However, we have come a long way in closing the gap between the insured and uninsured through passing the Medicare and Medicaid Act of 1965. This act created health care programs both for our nation’s older and lower-income Americans. We’ve since expanded the reach of these programs through improved policies over the years, most notably the 2010 passage of the Patient Protection and Affordable Care Act, or ACA.

These expansions in coverage and care should be a celebrated win for our country, but there remains much stigma around needing Medicaid coverage. If you live with diabetes, however, what’s most important is making sure that you don’t go uninsured.

This article will dig deeper into the process of enrolling in a public health insurance plan, and how to prepare mentally and physically for the transition. But first…

Medicaid is a blended federal and state program that provides health insurance to nearly 80 million Americans, including children, adults, pregnant people, and individuals with disabilities, most of whom are lower income and under the age of 65 (at 65+, all would qualify for Medicare).

Medicaid is the single largest source of health coverage in the United States, with total numbers of enrollees soaring because of COVID.

Under the 2010 ACA, 38 states plus the District of Columbia have expanded income eligibility for individuals to qualify for Medicaid, which varies by state and is a percentage of the federal poverty level (FPL). States can determine income eligibility as often as monthly, causing a lot of “churn” in the program.

Medicaid works like any other insurance plan, except there are no monthly premiums and there are rarely co-payments for necessary medicines, like insulin. Limited provider capacity due to low reimbursement rates is a big issue, however, and wait times to see a doctor can be long. Many health care providers do not accept patients who have only Medicaid. Those with both Medicare and Medicaid will have an easier time finding health care providers.

Medicaid, too, sometimes lags behind in coverage of supplies and medicines that private insurance covers. Continuous glucose monitors (CGMs) are covered by all private insurance, for example, but are not universally covered by Medicaid programs across the country. That is another unique aspect of Medicaid: each state’s program can be completely different from the next. Medicaid coverage for diabetes supplies in California may be very different from coverage in a state like Idaho, for example.

Why is there stigma?

Social scientists have long studied the stigma surrounding poverty, and increasingly how the stigmatization of poverty affects the delivery of health care. In our ruggedly individualistic society that celebrates self-reliance, where social safety net programs are viewed harshly and health insurance is typically seen as a benefit given to those who are gainfully employed, enrolling in Medicaid may seem like a cop out.

In fact, much of the stigma associated with health care is due to insurance status or stereotypes surrounding poverty. In one study in Oregon, 33% of respondents experiencing health care stigma were uninsured, and 67% of respondents were on Medicaid.

People may feel undeserving of health coverage, or ashamed that without the state’s help, they wouldn’t be able to afford their medicines. These perceptions are often reaffirmed when others mock them, call them lazy or entitled, or label them as undeserving of care.

Another study found that conservative states experienced a lower uptake of new Medicaid enrollees after Medicaid expansion than liberal states, which may be due to the high prevalence of negative associations with public health insurance in those states.

Health care providers, too, sometimes contribute to the negative stigma of Medicaid.

According to the Oregon study, nearly 80% of the time, the perceived stigma was grounded in direct interactions with a provider or doctor. One doctor in the study said directly to a patient that they were wasting taxpayer dollars. Patients often feel ostracized for being poor, as if they didn’t belong in a doctor’s office receiving care.

Providers may also not accept as many Medicaid patients because of low reimbursement rates from Medicaid, which pays much less than other insurance, including Medicare. A nationally representative survey of office-based providers in 2011 found that 30% were not accepting new Medicaid patients.

Other providers feel that the socioeconomic challenges faced by their Medicaid patients — such as lack of transportation to doctor’s offices, lack of paid sick leave for appointments, or the inability to fill and pay for prescriptions — lead to nonadherence and make the jobs more onerous for providers, and so they are reluctant to accept more Medicaid patients.

Some doctors may even mistakenly think that Medicaid patients are more litigious. Uninsured patients with financial difficulties are actually less likely to sue for malpractice.

Easing the transition to Medicaid

Whether you find yourself recently unemployed, going back to school, or in some other unforeseen circumstances that may qualify you for Medicaid, it’s best to be prepared for the transition. These steps can help you prepare logistically and emotionally for the change.

Has your state expanded Medicaid? Eleven states still have not, which means that even if you’re unemployed and not making any money, you may not qualify for coverage. Be sure to check your state’s income eligibility and make sure you apply for coverage. You can do this either on the Health Insurance Marketplace or directly with your state’s Medicaid agency. Determination of eligibility is pretty quick, and you can start receiving care once you are officially approved.

Brionna Hardin, 29, a substitute teacher and artist living in Lansing, Michigan, has type 1 diabetes and has been on Medicaid for four years. She says, “It was a struggle at first trying to navigate everything on my own, with no previous experience with Medicaid.”

Most online applications are easy to read and navigate, but seek help from a trusted friend or family member if you’re unsure about the process.

Know there is no shame in needing Medicaid

In every other industrialized country in the world, universal healthcare is just that: for everyone. Health care in other countries is seen more as a public utility and is accessible to everyone. The US, while not having as strong of a social safety net as other countries, does provide Medicaid when people don’t have other options for health insurance, and so it should be utilized!

Brionna says that knowing there’s no shame doesn’t stop the feeling that she is being stigmatized by doctors, however.

“I’m not sure if it’s common, but [my relationships with my] doctors [have been] pretty fleeting. I’ve had four different GPs [general practitioners] at the same practice in as many years. Many doctors don’t take or don’t like to take Medicaid patients.”

Find a provider who will listen to your needs

This is always hard, but can be especially challenging when switching insurance. Living with diabetes can be complex, and it’s crucial to find a doctor who will actually listen to your needs.

Sarah Petti, 32, a stay-at-home mom in Boston, Massachusetts, has lived with type 1 diabetes since she was 15, and says, “Switching to Medicaid was relatively easy, but once I was on [MassHealth], especially while pregnant, I did wonder if I was treated differently because I was a Medicaid patient. For example, I needed fluids badly and my doctor referred me to a mental health program instead. I never really felt like my doctor listened to me or gave me what I needed.”

Brionna adds, “When a doctor finds out I’m on Medicaid, they’re often less engaged in my needs, and I think that’s because I’m on public insurance. Any time someone hears I’m on Medicaid, they assume that I’m not working or that I’m just skating through life. I’m really just trying to get my health under control, and having that stigma is detrimental to my health and happiness.”

Whether the stigmatization is internalized or experienced, finding a provider who will listen to your needs is pivotal to getting the care you deserve.

Advocate for the care you deserve

Stigma is associated with poorer health outcomes and health declines, and it is a significant barrier to health care access. Unfortunately, this stigma is often experienced in the doctor’s office, and can be based on a provider’s political opinions about Medicaid, frustration with low reimbursement rates, or even their feelings about the Affordable Care Act.

It is the responsibility of the provider to communicate with all patients, regardless of the type of insurance they have, in the same way so that patients do not experience judgment or stigmatization.

At the same time, it is your responsibility as the patient to speak up about your needs and advocate for the care you deserve. This includes asking about newer medications or technology you’re interested in trying, problem-solving worrisome blood sugar trends, inquiring about starting an exercise routine, asking about nutritional guidance or counseling, or seeking mental health support when you need it.

Switching from private to public health insurance can be fraught with difficulties: everything from the application process, to knowing your income eligibility, to dealing with the stigma of a publicly funded health insurance plan such as Medicaid can be daunting.

Patients often experience stigma from others, including providers, so knowing your state’s eligibility and income requirements, advocating for the care you need, and finding a doctor who will truly listen to you are essential. Most importantly, knowing there is no shame in having Medicaid is the first empowering step you can take to feel more confident in your choices.

CF
Christine Fallabel
Christine Fallabel has been living with type 1 diabetes since 2000. She's a health and science writer and has been featured in Diabetes Daily Grind, Insulin Nation, Diabetics Doing Things,... Read the full bio »