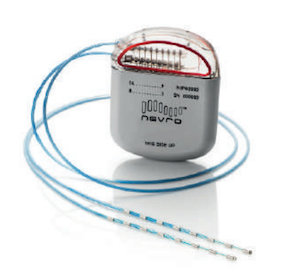 Spinal cord stimulators are now being researched for the treatment of painful diabetic peripheral neuropathy (DPN), a complication of diabetes characterized by chronic, painful nerve damage in the extremities. One system – Nevro HFX – has shown positive results in reducing pain from DPN.

What is Painful Diabetic Peripheral Neuropathy?

Diabetic peripheral neuropathy (DPN) is a serious complication that occurs when high glucose levels damage nerves in the extremities, including the hands, legs, and feet. Some degree of the condition may affect one in three people with diabetes at some point in their lifetime, particularly at times when glucose is less well-managed, or during recovery from that.

The symptoms of DPN may vary from person to person. It starts as numbness, pain, tingling, or burning sensation in the toes or fingers and may move up the legs or arms. This initial sensation can progress over time and can increase the risk for amputation.

Treatments for DPN have primarily focused on improving glucose levels as measured by A1C and Time in Range. There are also medications designed to help with the pain from DPN, however, these medications can have side effects and often lack long-term durability.

In recent years, the FDA has approved another treatment option for painful DPN: an established technology called spinal cord stimulation (SCS). Several SCS systems have been FDA approved, one of which is called Nevro HFX.

diaTribe spoke with Dr. Erika Petersen, professor of Neurosurgery, director of Functional and Restorative Neurosurgery at the University of Arkansas for Medical Sciences, and lead investigator of the SENZA-PDN study, to learn more about SCS, the Nevro HFX system, and what the clinical trial data on this device means for people with diabetes.

What is Nevro HFX?

Nevro HFX is a type of SCS system that operates at 10,000 Hz, and which includes the physical device and support services. In July 2021, it was the first to receive an FDA approval for the treatment of painful DPN. Since then, Medtronic has had two SCS systems approved for painful DPN as well. “The way I think of a spinal cord stimulator is sort of like a pacemaker for pain,” said Petersen.

Essentially, the device works by blocking the pain signals from ever reaching the brain.

HFX is unique among SCS systems in that it specifically delivers its signal at a high frequency of 10,000 Hz. Most other SCS systems deliver treatment at a much lower frequency, “typically 60 Hz, which would be 60 pulses per second,” said Petersen. The lower frequency devices can actually result in uncomfortable vibrating or tingling sensation (called paresthesia) targeted where a person’s pain is located. However, Nevro HFX with 10,000 Hz SCS is currently the only high frequency system approved for the treatment of painful DPN that does not cause paresthesia.

How can I start using Nevro HFX?

To start using HFX, people must first meet with a healthcare provider who offers the treatment. At the beginning, there is an option to try HFX in a temporary trial for about one week. This “test drive” allows people and their healthcare teams to see if HFX works for them to reduce pain and improve daily function.

Explaining how she uses the “test drive” period, Petersen commented, “within the test drive, is [HFX] something that gives the person the level of pain improvement that they are hoping for?  When I am doing one of those test trials, I want someone’s pain to be at least 50% better.”

If the device leads to significant improvements, the person can opt to have the full procedure. The surgery is short, minimally invasive, and can be done as an outpatient procedure.

The small device is implanted less than an inch beneath the skin at waist level and is connected to wires near the spinal cord. This device can stay implanted for about ten years and charges wirelessly, through the skin, with  a small charger paddle similar to a phone charger. After ten years, a short procedure is needed to replace the old battery with a new one.

What do results from clinical trials of Nevro HFX show?

Petersen explained that in over 200 people with painful DPN in the SENZA-PDN trial, those who received the HFX treatment saw significant pain reduction at six and 12 months compared to the start of the trial and compared to those in the control group who received conventional care. 86% of participants who were treated with the HFX system experienced more than a 50% pain reduction after six months and at the 12-month mark.

In addition, the Senza-PDN trial showed much more pain reduction in people using HFX than those in the control group, who received conventional care. When given the option to “cross-over” to receive the HFX treatment, 84% reported more than 50% pain reduction.

Those receiving the HFX treatment also had a significant reduction in their visual analog scale pain score (a scale that measures pain from 0 to 10) from 7.2 at the start to 2.4 at month one and 1.7 at month three. In the control group, however, there was no significant change in participant’s visual analog pain score until crossing over to receive the Nevro HFX treatment. Finally, 68% of participants in the Nevro HFX group had improved neurological functioning at 12 months compared to 0% in the control group. This means that there were actual improvements in sensation.

While many treatments for painful DPN only look at the effects for a short period of time – generally around twelve weeks – Petersen explained that the data for Nevro HFX shows pain reduction and durability up to twelve months. She added that they hope to publish twenty-four month data soon.

What does this mean for people with painful DPN?

When asked what these positive results meant for people with diabetes, Petersen elaborated on the many ways in which improving pain also improves a person’s ability to function and their quality of life.

“Pain limits the ability to have good function in your day to day activities,” said Petersen. “It limits sleep, it limits quality of life, it limits people’s ability to work and have relationships. So a lot of what we look at is not just validated pain scores, which are subjective, but we can actually look at other measures as well.”

It’s especially exciting to see the implications of what this significant pain reduction means. Petersen said that along with reduced pain, people’s functional abilities and quality of life improved in these trials.

“What we saw was all of those other measures improved: quality of sleep, duration of sleep, interruptions in sleep, the EQ5D which measures overall function, all improved in a meaningful clinical way,” said Petersen. “And all of [these results] follow that pain decrease, that average of 7.6 down to 2.”

To learn more about diabetic neuropathy, read “Hitting A Nerve: Introduction to Neuropathy.”

Matthew Garza
Matthew Garza joined the diaTribe Foundation in 2020 after graduating with honors from Johns Hopkins University’s Whiting School of Engineering where he majored in Biomedical Engineering and minored in the... Read the full bio »
AN
Armaan Nallicheri
Armaan Nallicheri joined Close Concerns in 2021 after graduating from Washington University in St. Louis with a major in Chemistry and a minor in Computer Science. Nallicheri is a guest... Read the full bio »
Do you recommend this article?
Yes