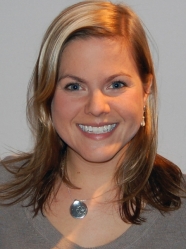 Kerri Morrone has been living with type 1 diabetes for almost twenty years. She writes a much-trafficked diabetes blog, Six Until Me (SUM), and is an active member of the diabetes community. She is known for her tagline, "Diabetes doesn't define me, but it helps explain me."

When I was diagnosed, my diabetes wasn't "mine" so much as it was my mother's. Even though her pancreas worked, she had to act as though she were mine. The numbers on my meter meant something to her. She navigated the wilds of peaking insulins, like Lente and NPH, and she waited patiently for my injection of Regular to slowly bring my high blood sugar down into range.

The first symptoms of diabetes presented themselves when I was a little girl, with the classic bed-wetting. There was no diabetes in my family, so no one thought anything of it.

The routine doctor's visit. The urine test. The results.

The middle shelf in the bathroom cabinet almost overnight went from holding hand towels to housing ketone strips. Boxes of syringes were piled high, like a diabetes warehouse. The test tubes were in the corner of the bathroom counter, where my mother would perform intricate experiments to see if the sugar content in my urine was too high.

There has been an evolution in my relationship with diabetes over the last 21 years, though.

When I was diagnosed, my diabetes wasn't "mine" so much as it was my mother's. Even though her pancreas worked, she had to act as though she were mine. The numbers on my meter meant something to her. She navigated the wilds of peaking insulins, like Lente and NPH, and she waited patiently for my injection of Regular to slowly bring my high blood sugar down into range. My mother and father made sure that there were sugar-free desserts at family picnics, and they fought hard to ensure that their medical insurance covered things like test strips and insulin prescriptions.

It wasn't my battle. I experienced the lows, but I didn't experience them alone. Regardless of whether or not she could actually feel the shakiness, my parents lived this disease with me.

It didn't become my battle until I realized it was actually there.

I became aware of diabetes when I was in middle school. Or at least I remember becoming aware of the fact that I was the only kid in my class who was testing her blood sugar during quizzes. My friends walked me to the nurse's office when I was low. My parents created classroom "care packages" that explained diabetes, low blood sugar symptoms, and emergency phone numbers, taking every precaution to make sure I felt like a "normal" kid.

And I did, for the most part.

When I was in 5th grade, another classmate had left a note in my locker about how she hated me because I was diabetic. It was the first time I had felt singled out, and it left a stain on my heart, a dark moment in my memory and one that I haven't forgotten about, even now, so many years later. I locked it up and kept it close.

There were other times when I felt oddly exposed as a diabetic, like when we learned about the pancreas in 4th grade and everyone turned around to look at me when the teacher mentioned "endocrine diseases like diabetes." There was also the time I had low blood sugar just before lunch, and I had to eat my meal, after draining three juice boxes, in the nurses office. Or the time I faked a low to get out of having to perform the obstacle course in front of my classmates in my 8th grade gym class.

It wasn't until I attended a camp geared toward girls with diabetes - Clara Barton Camp in Massachusetts - that I met other kids like me. We compared stuffed animals. We talked about our silly middle school crushes. We also all tested out blood sugars together in the morning, and we took out insulin as a group at night. They, like me, didn't look diabetic. But they were. Spending summer after summer at CBC as a kid proved that diabetes looked invisible on other kids, too, but it was there. I wasn't alone.

I acknowledged the fact that I was diabetic. And I became comfortable with saying it out loud.

Diabetic or not, the teenage years are riddled with expected angst. My battles about boyfriends and pontifications on prom dresses were happening alongside arguments with my mother about rogue blood sugars of 385 mg/dL.

Fiercely independent and determined not to be owned by diabetes, or anything for that matter, I took over complete management of my disease in high school. This included gaining my license, which opened double doors of freedom. Like any high school kid, I tested the limits of curfews and curse words, but I also tested the limits of diabetic responsibility. Faced with managing my own numbers and much of my own schedule, I found myself rebelling against the constraints of my condition. I lied about the results on my meter, sometimes dabbing a bit of rubbing alcohol on the test strip to produce a lower result. I visited late-night fast food drive-thrus and drank beer at parties on the beach.

Unfortunately, this spiral of rebellion continued into my college years, coming to a frightening peak as a junior, in the midst of my parents' very troubling divorce and my A1c of over 11 percent. I was confused. I was lost. I was scared and overwhelmed and my frustration with life was taken out on my health.

It took a letter from my endocrinologist, addressed to my primary care physician but mistakenly sent to my home, to rip me from my self-destructive path. I opened the envelope and skimmed along ... noting the typed-out elevated A1c, cholesterol levels, and a spike in my weight.

I came to a paragraph that was hand-written in that curly, familiar script of my doctor. "Kerri is going through some difficult times at the moment. She spent most of her time in my office on the verge of tears. I am concerned."

It was a cold hand on my hot and tear-streaked face. And it started me on the road back to taking care of myself.

Looking back now, it seems like it happened so quickly. It's as though I blinked and my A1c dropped from 11-something to 6-something. But it wasn't an overnight transformation, not by a long shot. There were several months of debilitating low blood sugars. There was one morning when the paramedics were called. There were discussions about the physical and emotional implications of insulin pumping. There was that one phone call to my endocrinologist in the middle of the night - "This is Kerri Morrone. I want to start pumping as soon as possible!" - and there were the long weeks of classes leading up to my transition to pump therapy.

There were the many jobs after college where I battled for medical insurance. There was that first afternoon at the gym, followed by another, and another. I took control of my diabetes.

Diabetes didn't make me love with such ease, but having tasted my own mortality makes every hug, every laugh, every kiss that much more needed and appreciated.

i took control of myself.

Such perspective is gained from a chronic condition, regardless of its complications. It doesn't define me, but the strongest parts of my personality may have been gently shaped by the perspective gained from having it.

I have lived with type 1 diabetes for twenty-one years. Fortunately, I've never had to live with it alone. I've had the luxury of a supportive family and friends, but hard as they tried to truly understand what it was like, they could only come so close.

Two years ago, I Googled diabetes and retrieved a list of possible complications and a few advocacy Web sites in return. Far from my summers at Clara Barton Camp, yet yearning for that same sense of community, I stumbled upon a handful of people with diabetes who were writing blogs. I devoured every word, and then felt inspired to start my own. Writing about diabetes, sharing my experiences and emotions with people who have felt similarly, has made such a difference.

Not feeling alone has helped me fully accept diabetes as a part of me, one that I can live with in relative harmony.