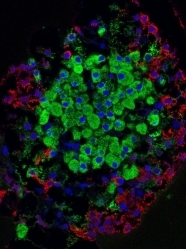 There was a lot of interest this ADA in the Harvard Stem Cell Institute’s diabetes research, which has previously shown the ability to produce mature, insulin-producing beta cells from human stem cells. These beta cells can effectively cure type 1 diabetes in mice. (Normally, beta cells produce insulin and are found in the pancreas).

While other groups are also working on stem cell based therapies for diabetes, the Harvard group is unique in that they are able to produce mature beta cells from stem cells. For comparison, the prominent diabetes stem cell research group at ViaCyte is only able to create “parent” cells that, after implantation in the body, could later develop into functional beta cells. Another group called BetaLogics, which is owned by J&J, can produce human “beta-like” cells that, while not identical to human beta cells, would already be mature (i.e. able to produce insulin in response to glucose levels) upon implantation. The Harvard group can also produce an extremely large quantity of cells, which is a critical need given the current deficit of beta cells for the millions of people with type 1 diabetes and type 2 diabetes who can no longer sufficiently produce insulin.

Dr. Douglas Melton from Harvard wowed the crowd with his update on the team’s latest discoveries, most notably the announcement that his team can now not only produce beta cells from stem cells, but also alpha cells (which produce glucagon, another important hormone) and delta cells. All of these cells are found together in ‘islets’ in the pancreas, and Dr. Melton believes that his team will in the future be able to create fully customizable islets (i.e., 40% beta cells, 40% alpha cells, and 20% delta cells). As some scientists believe that it’s necessary to have a complete islet in order to effectively treat diabetes, this work has the early (emphasis on early!) potential to become a major breakthrough. That said, Dr. Melton’s research is still only being tested in animal models, so it’s many years away from actually reaching patients – and a lot would have to go right for that to happen.

In the same session, Dr. Daniel Anderson (MIT), who is collaborating with the Melton group, shared very promising results from his team’s work in beta cell encapsulation. One of the biggest barriers to stem cell transplants for both type 1 and type 2 diabetes is protecting the implanted cells from attack by the immune system. In line with ViaCyte, Dr. Anderson’s team hopes to address this concern through the use of “encapsulation” devices – essentially shells that protect the implanted beta cells from immune attack. At ADA, Dr. Anderson presented new data showing that in non-human primates, they have been successful at implanting beta cells with their encapsulation device without any immune attack over a four-week period.

While this research is again at a very early stage (not even in humans yet), the current findings are certainly exciting. ViaCyte is currently in a phase 1 clinical trial, so hopefully by next year’s ADA we may have some initial clinical data on stem cell therapies in humans. Until then, we applaud all of these researchers for pushing forward with this very challenging work. -AJW/ER