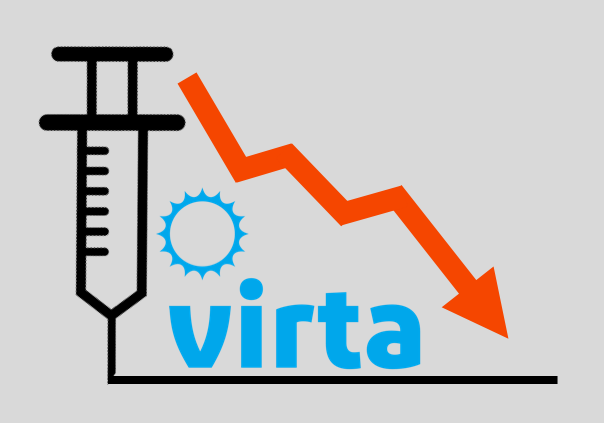 In the spring of 2017, Virta introduced itself as a solution to “reverse” type 2 diabetes without surgery or medications. Virta provides an “online specialty medical clinic” with health coaches and physicians who help participants address their diabetes using very low-carb, high-fat diets. Participants get to see their doctor at the “Virta Health Clinic” once a month by mobile, meaning they can talk to their doctors in their PJs if they want to! When it launched, Virta shared results from an initial 10-week study. They have now published the findings from the first full year of that same study, which show that the impressive trends observed in the ten-week study continued – A1c lowering, reduction of medications, weight loss, and positive improvements in a number of other outcomes like blood pressure and cholesterol. Wow!

What results did the Virta trial participants see after one year?

The ongoing study involves more than 250 adults with type 2 diabetes enrolled in Virta. The results:

Virta users also saw, on average, a 24% decrease in triglycerides, 18% increase in HDL-cholesterol, 39% decrease in C-reactive protein (a marker of inflammation) and lower blood pressure.

These results are from a pre-selected group of people, and while the trial results are not necessarily predictive for everyone in Virta, they are really impressive. In our view, what makes Virta so successful is the individualized, ‘high-touch’ care model, with constant access to coaches and physicians.

diaTribe Advisory Board member and diabetes educator Gloria Yee says, "These results are impressive, and they reinforce the effectiveness of consistent contact with health coaches. I would be interested to see if the positive trends continue with the same diet and care plan, and whether decreasing the frequency of follow-up to every two or three months would have an impact."

How does Virta work?

Individuals who used Virta got digital access to the Virta Clinic, where they could interact regularly (most were monthly) with health coaches and an assigned physician, as well as Virta’s educational resources. These health professionals work with each participant to come up with a personal plan to implement and sustain a very low-carb, high-fat diet. This carb restriction leads to something called “nutritional ketosis.” When the body doesn’t have enough carbohydrates for energy, it starts using fat as an alternative form of fuel.

The body does so by converting fat into ketones, which can be used for energy. Virta typically aims for less than 30 grams of carbs per day to cause a controlled state of ketosis. Virta doesn’t set any limits on how many calories participants can consume overall – what matters is that the calories come from mostly fat (over 70%) and moderate protein, with virtually no carbohydrates. The good news is that this approach is science based, and type 2 diabetes remission or ‘reversal’ is definitely possible for many people.  Separate studies have shown that substantial weight loss in a short amount of time can lead to diabetes “reversal” – it’s the weight loss, not the type of diet that seems to be critical.

What’s the catch? How much does Virta cost?

Virta is not inexpensive unless covered by employer insurance. For those paying out of pocket, it is approximately $370 per month or $4400 per year.

Virta partners with employers to make Virta available as a health benefit for employees with type 2 diabetes. In these cases, employers cover most or all of the cost of the program – the idea is that Virta will help the employer save money on overall employee healthcare costs. There is also the option to enroll individually, as noted, and there is some limited financial assistance available.

How do I enroll in Virta if I can afford it?

You can be referred to Virta by your healthcare provider, or you can apply yourself through their website. Upon applying or being referred, you will receive further information on pricing, and have the opportunity to schedule a free consultation. Those who are interested in enrolling have to be approved by Virta’s specialists, who screen for any risk factors that would make nutritional ketosis unsafe.

The diaTribe Foundation has partnered with Virta who agreed to give access to Virta to seven individuals over the last year. Five have enrolled and they are doing well – look out for an article shortly! We are hoping that their great results along with impressive results from Virta’s trial will enable more people to get access to this without having to pay for it themselves.