What is the Discussion On Stem Cells and Diabetes All About? A Guide to the Hope and the Hype 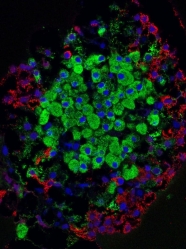 Twitter summary: What are stem cells and how can they treat #diabetes? Exciting project from Harvard still at early stage & updates on more research

Short summary: Researchers at the Harvard Stem Cell Institute have found what looks like a way (still to be proven!) to generate large quantities of human insulin-producing cells from stem cells. If developed further, this cell source could accelerate diabetes drug development and lead to game-changing therapies for type 1 and type 2 diabetes. However, it will be some time before a therapy based on this technology could be approved and reach the market. Learn more about the potential and limitations of this research, as well as about other groups working on insulin-producing cells that could be used for diabetes treatment.

Remember stem cells? They dominated newspaper headlines back in the early 2000s when scientists discovered the unique ability of stem cells to develop into many different cell types (e.g. stem cells taken from bone marrow could potentially turn into heart cells). This means that human stem cells could potentially produce cells and tissues to replace damaged ones and treat diseases. Unfortunately, the potential of stem cells for therapy was not realized as quickly as the 2000s hype suggested it would. Now, they’re a major focus of discussions about curing diabetes because of new research from the Harvard Stem Cell Institute.

Earlier this month, a team of Harvard scientists led by Dr. Douglas Melton and supported by JDRF, the Helmsley Charitable Trust, the NIH, and others, published a paper in the journal Cell, which outlined a groundbreaking new procedure for turning both human embryonic stem cells and human-induced pluripotent stem cells into functional human beta cells (the cells in the pancreas that produce insulin). The beta cells made in Dr. Melton’s lab can appropriately regulate glucose levels in mice, just like the beta cells found in people without type 1 diabetes. The hope is these beta cells could eventually be transplanted into actual human patients. Theoretically, implanting these cells could grant patients the freedom from insulin injections for extended periods of time, or perhaps forever.

After the paper from Dr. Melton’s group was published, some headlines in the mainstream media trumpeted that a cure for diabetes might be close at hand. This is not the case yet – it’s not even being tested in humans and that milestone is probably at least a couple of years away. Prominent diabetes clinician and researcher Dr. Jay Skyler notes that hope for new cell-based therapies for type 1 diabetes must not be allowed to turn into hype, which raises expectations unduly and leads to disappointment (some patients say they have been hearing since the 1970s that “a cure is coming in five years!” Hopefully that message is less and less common). Nonetheless, the Harvard work is exciting – albeit early-stage – and in this article, we hope to explain what we can reasonably expect going forward.

What Makes This News from Harvard Exciting?

Two major factors make Dr. Melton’s method for producing beta cells particularly notable: quantity and quality. Dr. Melton’s procedure can produce a large number of beta cells right in the test tube. In the past, transplants of human islets (the structures in the pancreas where beta cells are found) from deceased individuals have demonstrated very positive outcomes for type 1 patients, with some transplant patients freed from taking insulin for several years.  However, there simply aren’t enough islets available. A more plentiful cell source, such as the cells from Dr. Melton’s procedure, could help make beta cell transplants more accessible for a wider range of patients.

Of course, there is no point in producing large numbers of cells if they don’t actually work. Fortunately, through extensive study in cell cultures and animal models (but notably not yet in humans), Dr. Melton’s group showed that their stem-cell-derived beta cells produce insulin in a manner that accurately and repeatedly responds to glucose (e.g., the beta cells produce more insulin when glucose is high and less insulin when glucose is low). Just two weeks after being implanted in rodent models of type 1 diabetes, the cells improved glucose control and effectively “cured” the rodents (we note though that this is not the first time that rodents with type 1 diabetes have been cured). Although Dr. Melton’s team and its supporters are currently focused on type 1 diabetes, beta cell transplants could also help people with type 2 diabetes who use insulin as well.

What Other Stem-cell Therapies for Diabetes Are Under Investigation?

Separately from Dr. Melton’s group, the company ViaCyte is working on implanting a different cell source derived from human embryonic stem cells for type 1 diabetes. Unlike Dr. Melton’s work, ViaCyte’s product is made from immature pancreatic “progenitor” cells (you can think of them as “starter” cells), which then grow up into more mature insulin-producing cells once they are in the body. These progenitor cells may have some advantages over mature beta cell implants: 1) they can survive hypoxia (the lack of oxygen supply) upon implant, which beta cells cannot do as well, and 2) they can "grow up" into multiple islet cell types other than just beta cells (beta cells aren't the only cells effected by type 1 diabetes, so creating stem cell implants for multiple cell types may be beneficial). Another company called BetaLogics recently announced that in collaboration with Dr. Timothy Kieffer of the University of British Columbia, it had developed a procedure that generates mature functional human beta-like cells from human embryonic stem cells in a scalable manner. Unlike the cells from ViaCyte, these cells mature in the lab and are already “grown up” by the time they are implanted. While not fully equivalent to mature beta cells, these “beta-like” cells produced by the BetaLogics procedure exhibit glucose-responsive insulin secretion. In mice, implantation of these cells reversed diabetes in about six weeks. For comparison, pancreatic progenitor cells, such as those used by ViaCyte, take about three to four months to generate a similar response, since they need time in the body to become functional beta cells.

One of the biggest barriers to stem cell transplants for both type 1 and type 2 diabetes is protecting the implanted cells from attack by the immune system. When cells are transplanted into the body, the immune system recognizes them as foreign and attacks them as it would an infection. In people with type 1 diabetes, these implanted cells could also be vulnerable to the autoimmune attack that causes the disease in the first place, though this response would likely be less severe. Thanks to prior experience with islet and pancreas transplants, researchers already know that the immune system can readily destroy such transplants if the immune system is not suppressed with added drug therapies. Unfortunately, long-term use of such medications comes with side effects, including increased risk of infection and some cancers.

ViaCyte and BetaLogics are tackling this issue by using “encapsulation” devices for their own cell transplants that essentially serve as shells to provide a barrier between the cells and the immune system. However, those shells still let the glucose and insulin in and out. ViaCyte’s VC-01 therapy (roughly the size of a credit card, placed under the skin) is now starting testing in humans. Dr. Melton’s team does not have its own implantation device yet, though it is collaborating with other groups (including Dr. Dan Anderson at MIT) to move these efforts forward.

Balancing the Hope and the Hype

It is important to note that it is too early to predict whether Dr. Melton’s research or the work done by ViaCyte or BetaLogics will amount to an approved clinical treatment for humans. Safety and efficacy studies take several years to conduct, and there is no guarantee that these cells will lead to the same outcomes in humans that have been seen in mice. Even if they do, the entire process would likely take up to ten years or more before they could realistically reach patients. ViaCyte is the farthest along in the regulatory process – it is the only group so far with regulatory approval to start clinical trials in humans and in the past, ViaCyte has suggested its treatment might reach the FDA for approval in 2019 or 2020.

That said, there is certainly a reason to be excited about the work being done from Harvard, ViaCyte and BetaLogics. While these should not be considered the cure just yet, early breakthroughs do pave the way for the bigger clinical milestones that we are all waiting for. We hope that even if the projects from Dr. Melton, ViaCyte, or BetaLogics do not themselves make it to regulatory approval, their work will build the base for later efforts that could go the distance. Harnessing the power of stem cells to treat or even cure diabetes would be a miracle of science, and we salute all the researchers, foundations, and companies working hard to do this every day.