The Wonders of Byetta: One Man’s Weight-Loss Journey 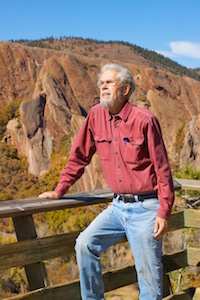 After a dozen years with diabetes, I knew I had to make a change. Technically speaking, I was “morbidly obese.” My weight may not have been killing me, but it was certainly crippling me.

I’m tall – 6 foot 2 1/2 inches – but I tipped the scales at 312 pounds and had a body mass index (BMI) of 40. I was ashamed that I weighed so much. At the same time, I had almost given up hope that I could ever get down to a normal weight. I knew how to eat low-glycemic food, but I ate to

o much and exercised too little.

A wall of fat separated me from my favorite pastimes. Ever since I was a little boy, I’ve loved to walk in the woods and hike in the highlands. Being close to the Rocky Mountains is one of the joys of living in Boulder, Colorado. But a couple of years ago, my doctor told me that the pain in my left knee was arthritis. I could still walk where it was flat, but climbing or coming down hurt too much.

Moving my big body became much harder. I had to use a grabber to pick up the newspaper in the driveway. Getting out of a low chair became more and more of a chore.

So in February of 2006, I was desperate enough to consider a new diabetes drug that must be injected into your belly. There can be negative side effects – nausea – but I was still curious. The FDA said that doctors could prescribe Byetta for people with type 2 diabetes who were using the most common drugs for controlling blood glucose – one of the sulfonylureas or metformin or both (since then the FDA has said that doctors can prescribe it with some other diabetes drugs). I was taking both a sulfonylurea and metformin when I started on Byetta. My A1c level was a bit below 7.0 percent, which some – but not all – diabetes organizations consider adequate.

My big interest was in Byetta’s positive side effect – weight loss. But when I studied its prescribing information, I saw that the people in the clinical trials lost only an average of about six pounds after 30 weeks.

I wasn’t impressed, but I then spoke to an endocrinologist, Dr. Joe Prendergast, whom I have admired and written about for years. When he told me about the experience of his patients, I was convinced to try it. Dr. Joe said the average weight loss for his 200 patients using Byetta was 35 pounds over nine months.

Which is precisely what I wanted to do. However, my regular doctor, who had been ragging on me for years to lose weight, didn’t know about Byetta. He read the clinical trial results and decided I wouldn’t lose much weight on it.

I decided to find a different doctor, and my salvation came in the form of an email from Dr. Jeffry N. Gerber, who told me that he is a family physician who specializes in encouraging his patients to lose weight. His office is south of Denver, almost an hour from Boulder. He wrote that he was eager to start some of his patients on Byetta.

I wished. I wanted better health and knew that my weight was my biggest obstacle.

I got my wish for lower weight and better health. Byetta didn’t cause me to lose weight. But it made losing weight easier. How? By cutting my appetite, so I was seldom hungry any more. I totally changed what and how much I ate.

Byetta reduces our appetite in two ways. It slows gastric emptying, and it also affects the central nervous system, triggering a feeling of satiety. (For more on how Byetta works, see our Learning Curve on Byetta)

Since I knew that about half of all people who take Byetta have nausea, I prepared for it by eating very little from the first. As a result, I’ve had almost no negative side effects. The only nausea I experienced was for about three hours when I took the first shot.

Once I started injecting Byetta, I began to lose weight immediately. I soon noticed that my trousers and shirts were too loose, and I enjoyed it whenever friends told me how much thinner I looked.

While lots of things in life are vicious circles, Byetta and energy are related in a virtuous circle: the more weight I lost and the more I exercised, the more energy I had. All this feedback gave me more motivation than ever to keep on losing weight. I also noticed that I needed less and less food to fill my stomach as it got smaller.

In my 53 weeks on Byetta, my weight has dropped from 312 to 201 pounds. From the start, I told everyone who would listen that my goal by October 26, 2007, was to weigh less than when I got an honorable discharge 50 years ago from the U.S. Army. That meant weighing 194 pounds, which would give me a BMI in the normal range. I’m almost there!

With my lower weight, my blood glucose levels have come way down. My A1c went from 6.8 percent to 5.3 percent, despite my discontinuing the other diabetes drugs I was taking when I started on Byetta.

The arthritis that I had is totally gone. I can walk in the mountains again.

I also had elevated liver enzymes that showed I had a fatty liver, which can lead to nonalcoholic steatohepatitis and liver failure. Now, my liver enzymes are normal.

Now that my weight and blood glucose levels are under control, I feel at least 10 years younger. I have a whole lot more energy than I have had in years. My mood is much more positive.

It’s clear why Byetta has been so successful, with already more than a half million people taking it. In my case, I don't expect to ever stop using Byetta or a forthcoming product in that category of drugs. That's because nothing else has helped me control my voracious appetite. However, I have stopped using all other type 2 diabetes drugs. Even if I stopped using Byetta (or a similar drug), I would not consider myself “cured” – just in remission.

The biggest problem is that my waist size dropped from 56 inches to 40 inches. That meant I had to buy a whole new wardrobe of slacks, shirts, and underwear. At least the size of my feet and hands didn’t change! And since my head is still as big as ever, I didn’t have to buy any new hats.

He writes at www.mendosa.com and maintains a very popular weblog at MyDiabetesCentral.com, for which he was voted top adult type 2 blogger in January 2007 by the Official Diabetes O.C. Website.