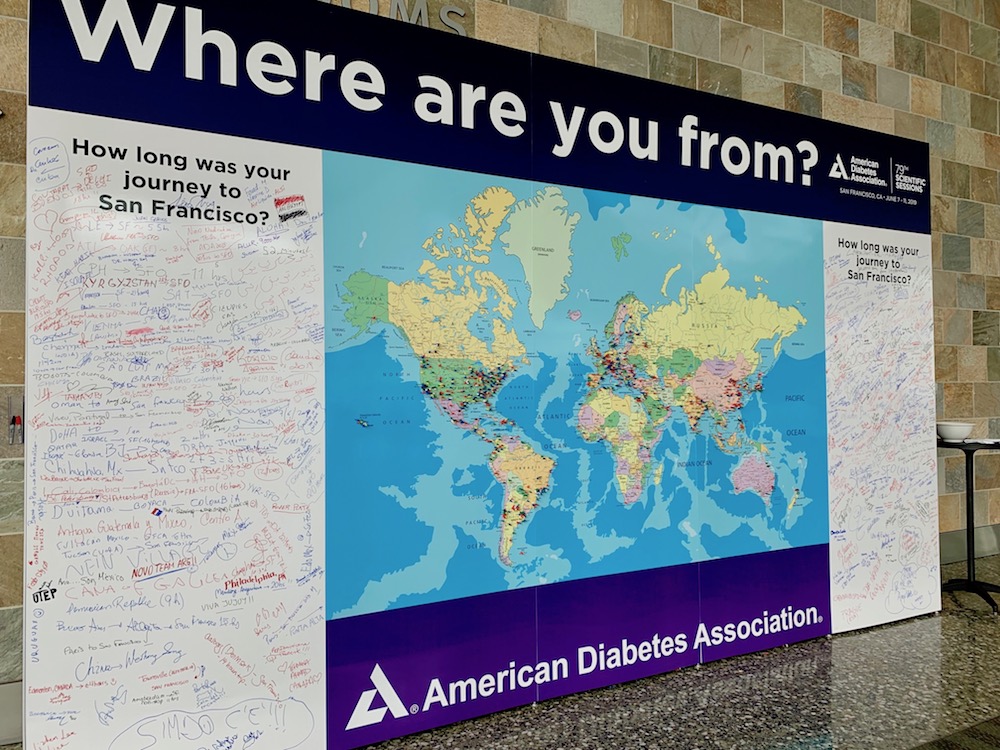 The third day of the American Diabetes Association (ADA) 79th Scientific Sessions was filled with very positive news on multiple fronts. In addition to what is being described as a “breakthrough” in therapies to delay type 1 diabetes diagnoses in those at risk, a slew of results marked an ever-expanding array of automated insulin delivery systems. Additionally, important study results around GLP-1 agonist Trulicity as well as low-carb eating patterns rounded out the day. Read below for day 3 highlights!

In phenomenal news for the diabetes community, teplizumab delayed type 1 diagnosis by two years compared to placebo (“nothing” treatment). On average, time to diagnosis for the teplizumab group was four years, compared to two years with placebo. At the end of the trial, there were an impressive 53% in the teplizumab-treated group who did not have type 1 diabetes, as compared to 28% in the placebo group. While not a cure, two years of living without the daily burden of diabetes management is a meaningful outcome.

Teplizumab is an anti-CD3 treatment that has been previously shown to reduce the loss of beta cell function by suppressing the body’s immune system. The study enrolled 76 relatives – both adults and children – of people with type 1 diabetes; the participants did not have type 1 but were at high risk for developing the disease as they had elevated blood sugar levels and two or more type 1 autoantibodies (indicators of immune system attack on beta cells). People took teplizumab for 14 days (as an IV infusion) at the beginning of the trial.

The compound was first developed by Dr. Jeffrey Bluestone of UCSF in 1986. After a long history of both positive and negative outcomes, teplizumab has been acquired by Provention Bio for continued development.

The REWIND trial examined the heart effects of Trulicity, a once-weekly injectable GLP-1 agonist for people with type 2 diabetes. It revealed a 12% reduced risk of a combination of non-fatal stroke, non-fatal heart attack, and heart-related death compared to placebo (a “nothing” pill). This benefit was the same among study participants who had existing heart disease and those who only had heart disease risk factors. As such, REWIND offers the first evidence that GLP-1 agonists may prevent strokes and heart attacks in people without diagnosed heart disease.

Looking more closely at the heart benefits, a reduction in non-fatal strokes appears to have driven much of Trulicity’s impact, with a 24% risk reduction compared to placebo. The other two components, non-fatal heart attack and heart-related death, were non-significant, meaning that the reduced number of these events could have been due to chance.

When the trial started, participants had lower A1C’s than in other studies (a median of 7.2%), and a lower number of them had existing heart disease (31%). This makes the results even more meaningful because an even broader, healthier group saw prevention benefits. Notably, REWIND is also the longest heart outcomes trial for a GLP-1 agonist at over five years in length. For these reasons, the study sponsors suggest that its results are closer to reflecting the “real world” than those of other studies examining Victoza, Ozempic, Adlyxin/Lyxumia, and Bydureon.

The trial also showed potential positive kidney effects for Trulicity. The risk of a combination of kidney outcomes (new macroalbuminuria, 30% decrease in kidney filtration rate, and progression to kidney replacement) was reduced by 15% compared to placebo. This was driven by a 23% relative risk reduction for new macroalbuminuria (large amounts of protein in the urine, suggesting the kidneys are not working properly); the other two components were not significant. Emerging evidence suggests that another class of drug, SLGT-2 inhibitors (Invokana, Farxiga, Jardiance, and Steglatro), may have even stronger kidney benefits.

Previous studies have demonstrated the A1C-lowering and weight loss effects of Trulicity.

Tandem’s Control-IQ showed very positive results at ADA – the session ended with multiple audience members expressing their excitement about using this automated insulin delivery system as soon as it becomes available. As a reminder, Control-IQ is an automated insulin delivery system that combines the Dexcom G6 CGM, Tandem’s t:slim X2 pump, and an algorithm.

Importantly, the TIR benefits came early – in the first month of use! – and were maintained across the six-month study period.

Control-IQ also achieved near-perfect scores on a technology acceptance questionnaire. People rated ease of use as 4.7/5, usefulness as 4.6/5, trust as 4.5/5, and desire to continue using as 4.8/5. These positive ratings speak to the system’s convenience: no modes to juggle, no fingersticks due to the Dexcom G6 CGM, and limited alarms. Impressively, 100% of participants stayed in the study.

Tandem confirmed that Control-IQ will be submitted to the FDA for 14 years and up, with a US launch expected “this year, subject to FDA approval.” A study in younger children (ages 6 and up) is up next.

At the 2019 Advanced Technologies & Treatments for Diabetes (ATTD), we got a preview of the international consensus report on TIR goals. The refined report has now been published online in Diabetes Care. The key takeaways were that people with type 1 and type 2 diabetes should aim to spend:

Importantly, the panel of authors add that even if a person isn’t at 70% in-range, every 5% increase in TIR is significant! After all, as diaTribe Senior Editor Adam Brown points out along with many notable researchers and clinicians, every 5% increase is equal to approximately one hour or more a day spent in range.

The hope is that the recommended goals increase CGM use – until now, there had not been any agreement on what appropriate time-in-range goals should be. We were particularly happy that this working group was patient-oriented – diaTribe Editor-in-Chief Kelly Close was a part of the author group as were other renowned researchers with diabetes, including JDRF CEO Dr. Aaron Kowalski and Dr. Irl Hirsch of the University of Washington. 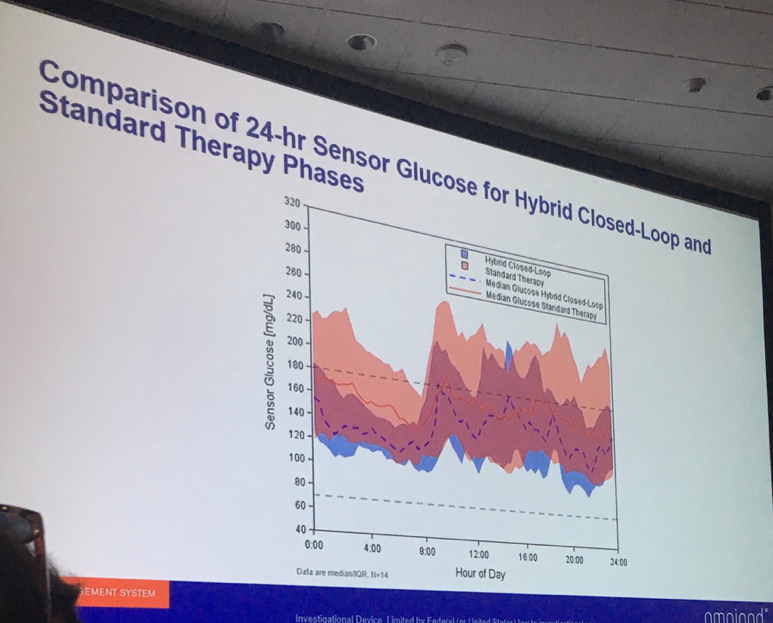 When it launches, Horizon will be made up of the Omnipod tubeless patch pump, the Dexcom G6 CGM, and an algorithm. In this study, an earlier Dexcom model was used. The Horizon pivotal study (collecting data to submit to regulatory agencies like the FDA) is set to begin toward the end of 2019.

The WISDM study examined the impact of CGM use in people with type 1 above the age of 60 years. Participants were using either the Dexcom G5 CGM or standard blood glucose meters (BGM). The CGM group spent less time in hypoglycemia (below 70 mg/dl) and two more hours per day in range (70-180 mg/dl) by the end of the six months compared to the BGM group. A1C reduction was also greater in the CGM group. Importantly, those on CGM reported significantly fewer severe hypoglycemia events (defined as requiring assistance of another person). These benefits were seen regardless of pump versus multiple daily injection (MDI) usage.

While there has been doubt about the effectiveness of diabetes technology in older populations, the WISDM study shows that CGM may be just as important for older adults as younger adults. As CGMs become even easier to use and affordable in the coming years, they should be adopted by more and more people of all ages and backgrounds.

URLi (pronounced “early”) is an ultra-rapid acting mealtime insulin in development by Lilly. It is a modified version of Humalog that gives it a faster onset and offset profile.

Notably, post-meal URLi was also studied – taking the mealtime insulin after a meal instead of before. With post-meal URLi, the blood glucose level benefit was lost, but the presenter noted if necessary, URLi could be used after a meal.

Benefits of Eating Low-Carb with Diabetes

The new ADA nutrition guidelines outline low-carb diets as a viable approach for managing diabetes. (In diaTribe’s own nutrition principles, we encourage readers to limit meals down to 30 grams of carbs.) In this session, experts shared potential benefits of eating a low-carb diet when living with diabetes, including:

Experts also addressed common concerns of the low-carb approach: cholesterol, ability to stick to low-carb, and taste appeal. In two trials mentioned, individuals with diabetes on a low-carb diet had increased LDL cholesterol (the “bad” kind). However, all other cardiovascular risk factors, including triglycerides, significantly improved. To test the ability for people to stay on a low-carb diet, researchers studied low-fat and low-carb plans and found no difference. Lastly, Dr. Laura Saslow emphasized that low-carb diets can be delicious! See one of our most well-read pieces for a few Low-Cost, Low-Carb recipes.

Because of increased mealtime insulin resistance with low-carb diets, an insulin to carbohydrate ratio may not be sufficient for bolusing. If you are trying a low-carb or very low-carb diet, presenters recommended discussing an insulin to protein ratio instead with your healthcare provider.