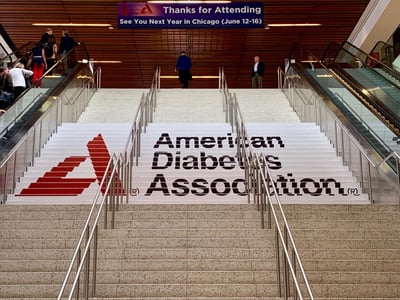 Day 2 of the American Diabetes Association’s 79th Scientific Sessions was packed with results from diabetes drug and technology studies showing benefits in A1C reduction and increased time-in-range. In particular, there were many sessions focusing on food and exercise – two very high-impact areas of diabetes management. Read below for day 2 highlights!

Two trials examined the effectiveness of a once-daily pill (oral) version of Ozempic (semaglutide) for lowering A1C and weight in people with type 2 diabetes. Oral Ozempic is the first non-injectable GLP-1 agonist.

The PIONEER 2 trial compared oral Ozempic to once-daily SGLT-2 inhibitor Jardiance in people already taking metformin, and with an A1C between 7% and 10.5%. The study found:

The PIONEER 4 trial compared oral Ozempic to once-daily injectable GLP-1 agonist Victoza in people already taking metformin, and with an A1C between 7 and 9.5%. The study found:

Oral Ozempic was submitted to the FDA for approval in March 2019, and a decision is expected by September 2019. 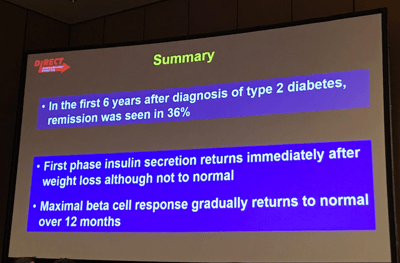 The Diabetes Remission Clinical Trial (DiRECT) tested whether restricting calories consumed would lead to remission in type 2 diabetes, defined as having an A1C below 6.5% and discontinuing all diabetes medications for at least two months. After one year, 46% of participants achieved remission; after two years, of the 46%, 70% were able to maintain remission.

New analysis of the DiRECT data showed that people who put their diabetes into remission had full recovery of beta cell function: the insulin secretion level in response to hyperglycemia (high blood sugar) was indistinguishable from people who did not have type 2 diabetes.

How does losing weight improve beta cell function? Professor Roy Taylor says that it is specifically reducing fat in the liver and pancreas that improves both insulin secretion by the beta cells as well as insulin sensitivity.

There is now evidence to show that type 2 diabetes does not have to be a progressive disease, if action is taken early on. In a sentence, Professor Taylor summarized the results as “good news for people with type 2 diabetes,” and we couldn’t agree more! 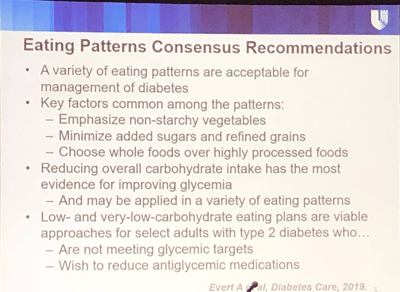 Though we covered the report and its recommendations when they came out, we were eager to hear from guideline authors. Dr. William Yancy summarized the key takeaways of the report:

Diabetes advocate Kelly Rawlings highlighted the importance of individualized strategies. Some specific examples she gave were:

Dr. Christopher Gardner concluded the session by asking people to focus on decreasing sugar consumption, saying that “America is the leading consumer of added sugars. Let’s not bicker about paleo, keto, etc…let’s focus on this!”

PREVIEW Study Confirms Lifestyle Changes Can Prevent Type 2 Diabetes, But Half Dropped Out of Study

After three years, just 4% of those who remained in the study were diagnosed with type 2 diabetes. There were no differences between diets or exercise regimes. Researchers estimated that without any intervention, about 21% would have been diagnosed with type 2 diabetes. Dr. Ian MacDonald believes that the comparable results across the four groups was due to the initial and sustained weight loss throughout the trial. Before people were randomly assigned to a group, everyone was put on a low-calorie diet, with an average weight loss of 23 lbs (10.7 kg) from an average starting weight of 220 lbs (100 kg).

Lifestyle change, however, is notoriously difficult to keep up. Only 43% of the participants initially enrolled in PREVIEW completed the three-year program, highlighting the importance of coaching and support.

The MiniMed 780G is the next iteration of the 670G hybrid closed loop system. Improvements and new features include automatic correction boluses, Bluetooth connectivity, remote software updating, a time-in-range goal greater than 80%, and an adjustable target blood glucose level down to 100 mg/dl. It will be enrolling up to 350 people with type 1 diabetes ages seven and up. See more information here!

Medtronic’s next-gen CGM will only require calibration on day one of the seven-day sensor. It will be enrolling up to 460 people with both type 1 and type 2 diabetes ages two and up. Read more here. 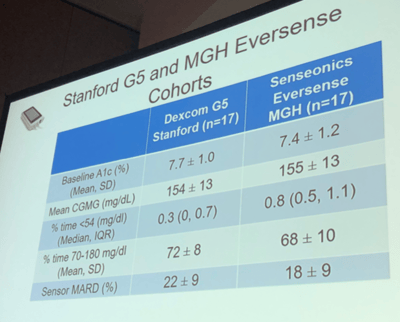 Beta Bionics’ Gen 3 iLet device is an automated insulin delivery system that combines the iLet insulin pump, an algorithm to adjust insulin delivery, and a continuous glucose monitor (CGM). In this seven-day study, participants used either the Dexcom G5 or Senseonics 90-day Eversense CGM. Both pump and multiple daily injection (MDI) users were included in the study.

Compared to usual care, time-in-range (70-180 mg/dl) improved by 1.9 hours per day on the iLet (70% versus 62%) – this was a statistically significant difference. The G5 and Eversense CGMs performed similarly, showing that the Beta Bionics system works with two different CGMs.

Excitingly, when iLet runs on a bihormonal system – that is, both insulin and glucagon – users see an even greater time-in-range benefit. In bi-hormonal mode, users spent 79% of the day in range (compared to 71% with insulin only), translating to two additional hours in range. Those using bi-hormonal mode also experienced less hypoglycemia.

Though the sample sizes of these studies were small, these results are an important step forward towards a closed loop system.

First Eversense Real-World Data in US: Accuracy Decline and 75% Re-Inserted; Plus, No Fingersticks!

Following the approval and launch of the implantable Senseonics 90-day Eversense in the US, we were excited to learn of how the CGM is performing in the real world (outside of clinical trials). Unsurprisingly, sensor accuracy declined – a common occurrence with real-world use of CGM. About 75% of people who completed their first 90 days of Eversense decided to insert their second sensor.

People spent 62% time-in-range (70-180 mg/dl), translating to about 15 hours per day and just 4% time below 70 mg/dl (about one hour per day). Curious about safety issues of implanting a sensor under the skin? Only 5% experienced skin irritation, 2% experienced mild infection at the insertion site, 2% failed to remove the sensor on the first attempt (done by healthcare provider, not user), and 2.5% experienced irritation due to the transmitter adhesive.

In other news, the FDA approved the device for non-adjunctive insulin dosing, which means that people can make dosing decisions using Eversense without confirming their blood glucose level with a fingerstick. This puts Eversense in the same approval category as the Dexcom G6 and Abbott’s FreeStyle Libre.