I’m now exactly eleven days out of the five-day Boston University/Massachusetts General Hospital bionic pancreas1 trial that I took part in. I can’t quite talk about it too directly, without my eyes starting to fill up. So dramatic, I know! But I feel forever changed, having been part of this research study, and now knowing (albeit only for a week) what “normal” life was like before diabetes – not having to carb count, not experiencing any hypoglycemia, not feeling tired all the time, and not having diabetes on my mind every five minutes. In short, I felt like a whole new Kelly. You can see some of the pictures and videos I took on our diaTribe twitter at twitter.com/diaTribenews.

What is this study exactly? Well, Dr. Edward Damiano (the engineering genius from BU), Dr. Steven Russell (a star endocrinologist at MGH), and a slew of colleagues have built a system over the last decade to make life with type 1 diabetes much, much easier. The system uses an iPhone running a control algorithm, two Tandem t:slim insulin pumps (dosing insulin and glucagon), and a Dexcom G4 continuous glucose monitor. This bionic pancreas (also called an “artificial pancreas” or “closed loop”) takes glucose data from the Dexcom CGM and runs it through a control algorithm on the iPhone. The algorithm then processes the data and automatically directs insulin and glucagon dosing – in a word, magical. This dosing happens every five minutes, so the system automatically makes many very small adjustments to keep glucose levels in range. The bionic pancreas only needs your weight to start up, and the algorithm adapts and learns over time from its performance – in other words, if I become very insulin resistant for a few days (e.g., little sleep, stress, less than my normal amount of exercise), it will robustly adapt and increase the amount of insulin it gives. How cool is that! 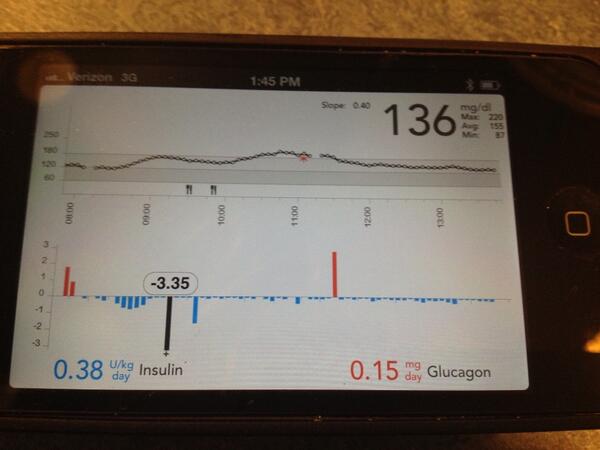 What was also so impressive about Drs. Damiano and Russell’s study was how very real-world it was. Unlike most studies in the past that confined bionic pancreas research participants to a hospital bed, I was able to roam around a three-square mile area of Boston. I could eat what I wanted (restaurants were encouraged!), exercise as I wanted, and sleep by myself in a hotel room. Just in case anyone was ever close to danger, the study had three teams of nurses following me and making sure I stayed safe, even to the point where I wore an IV at night and they followed my minute-to-minute blood glucose readings on a screen next door. Big picture, it was fantastic to see what wearing a bionic pancreas would be like in more of a daily life setting. The study’s goal is to assess the safety and effectiveness of the bionic pancreas, so its performance was compared to five days of my own “standard” care without the bionic pancreas.

I knew it would be cool to be part of the trial. I’m one of about 30 participants who get to take part in it, one of the first closed-loop trials in the world to take place outside the hospital setting. I love new technology, I love clinical trials, and I love the hope that accompanies early-stage research.

So when they told me that I might be quite depressed when I had to give back the bionic pancreas (a little box that the research team kept calling “your pancreas,” as in “Oh, don’t forget your pancreas!”, “Don’t drop your pancreas…”, etc.) I felt “Oh right! Come on. This is so exciting being part of this trial. How could I ever be depressed!”

So what was it like to have a machine making all these decisions for me? Well…

That’s already enough of a game changer for me. But there was more…

Because the system uses both insulin and glucagon, I got to see mini doses of glucagon in action for the first time. There’s no question about it – glucagon is a cool hormone. It is ten times better than orange juice, glucose tabs, candy, gel, etc. It is SO precise and the power of having just the right amount was really cool. It was magic!

Don’t get me wrong – the system still doesn’t match how great a pancreas is in someone without diabetes. The bionic pancreas must still deal with the 60-90 minute delays in rapid-acting insulin absorption. That means that my blood sugar did exceed 200 mg/dl after big meals. (An analogy to think about this is steering a car – if it took the car 60-90 minutes to respond to movements of the steering wheel, you would inevitably run off the road sometimes.) What was very key was how the system brought me back down from these highs – super safely and far more quickly than I could regularly ever do. I went from a high over 200 mg/dl to a safe, soft landing right in range. Usually when I stare at a number over 200 mg/dl, I take too much insulin (a “rage bolus” as Kerri Sparling would say), go low, eat too much, go high, and ride a roller coaster of highs and low all day.

During the trial, I also had a striking epiphany about living with diabetes: “Oh my gosh, I waste so much time having diabetes!” Being distracted because of a low, doing all these things to make sure I’m staying in range, and the super big time-leech, hyperglycemia. Whew! I felt like my whole world changed when I was constantly in a state of normoglcyemia. And then I wondered how much I try to be "normal" and make it "seem" like diabetes is easy to manage – that mentality is also probably exhausting, even though I'm not even aware of it.

My bionic pancreas never failed me. I felt like the 17 year-old, completely carefree Kelly I used to know back before I was diagnosed. Getting rid of hypoglycemia and hyperglycemia for a week was one of the most powerful things I’ve ever experienced. I already like myself but with the bionic pancreas, I felt even better in my own two shoes. And in turn – this experience gave me renewed hope for what I used to say might be possible and what I know today absolutely is possible.

I had been warned that I wouldn’t want to give my bionic pancreas back to the researchers at the end of my five days with it. They said I might become depressed. I laughed – who could possibly become depressed after being so lucky to be chosen for this trial?

Well, they were right – I definitely did not want to give it back. And I certainly miss it.

(For more background on the artificial pancreas, please see the conference pearls in diaTribe #53 and diaTribe #54.)

1The BU/MGH team believes the term “bionic pancreas” is more descriptive than “artificial pancreas” – 1) “bionic” literally means “Having anatomical structures or physiological processes that are replaced or enhanced by electronic or mechanical components,” which describes exactly what the system is trying to do; and 2) the term “artificial” lacks specificity, as it only describes what the system is NOT. Going into the trial, I wondered if this was semantics but coming out of it, I absolutely felt I had a bionic pancreas rather than an artificial one.