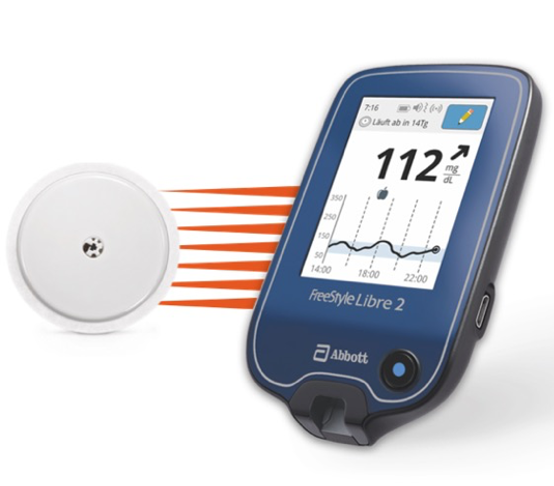 Abbott’s FreeStyle Libre 2 was recently cleared by Health Canada for people with diabetes four years and older. The FreeStyle Libre 2 is Abbott’s next-generation continuous glucose monitor (CGM), which measures glucose levels every minute and lasts for up to 14 days. The company plans to make the device available to Canadians in the coming months.

The most exciting feature of the new device is the optional glucose alarms: Bluetooth connectivity enables FreeStyle Libre 2 users to receive automatic alerts on their smartphone or sensor reader when glucose levels go above or below their target range. The new sensor is more accurate than the original FreeStyle Libre, especially for low glucose levels. Learn more about the FreeStyle Libre 2 here.

Like the original FreeStyle Libre, the new CGM is able to be worn for 14 days, has a one-hour warm-up time, requires no fingerstick calibrations, and it can be scanned with either a reader device or the LibreLink smartphone app. The self-applied sensor is the size of two-stacked quarters and is worn on the back of the upper arm. Importantly, the FreeStyle Libre 2 will be offered at the same price as the original FreeStyle Libre. Click here to learn about device availability and pricing in Canada.