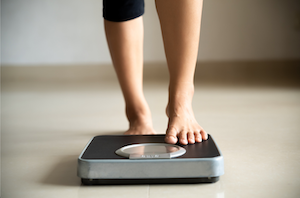 The relationship between obesity and diabetes is complex, but the many relevant factors related to genetics, lifestyle, and the environment are becoming clearer. Hear expert opinions on these relationships, as well as insights on treatments and weight stigma from diaTribe’s Solvable Problems in Diabetes panel discussion.

There are a number of factors that influence the relationship between obesity and diabetes, but one thing is clear: these two conditions are closely linked and both continue to be increasingly alarming public health issues. In fact, around 90% of people with type 2 diabetes have excess weight or obesity.

For many years, the exact causes and biological links between diabetes and obesity were unclear.  However, due to new scientific research and innovative treatments for both obesity and diabetes, experts now have a better understanding of the role of weight management in moderating the severity and progression of diabetes and its complications.

Causes of obesity: an ongoing debate

There are several causes of obesity and of an individual’s risk for developing obesity, diabetes, and related complications. These include genetics, social and environmental factors, exercise, and other dietary and personal behaviors. Experts in the world of obesity and diabetes broke down many of these factors at diaTribe’s recent “Solvable Problems in Diabetes: Translating Innovations in Weight Management into Meaningful Results” panel discussion. You can watch the full panel discussion here.

Though each panelist had varying perspectives on the extent that genetics and the environment play in driving a person’s risk for obesity, all recognized that genetics plays a meaningful role.

“We know that human genetics have not changed in thousands of years and that the obesity epidemic has been associated with our recent environmental changes, but it is important to recognize that association is not the same as causation,” said panelist Carel le Roux, a professor at University College Dublin and an expert in in metabolic medicine. “Our efforts to combat obesity by changing [a person’s] environment have failed. We thought that overeating caused obesity, but we are now realizing that obesity can actually cause overeating. Instead of stopping people from overeating, we now should be thinking about the root cause of the disease – which comes from genetics.”

Fellow panelist Roy Taylor, professor of Medicine and Metabolism at Newcastle University, took a slightly different approach, arguing that changing our environment plays a significant role in the expression of obesity.

“Our environment and the way that we classify obesity has changed significantly, but human genetics have been constant,” he said. “People will be inclined to overeat based on their genetics, but if we limited the availability of excess, processed foods, these genes would be expressed much less today than they currently are.”

The debate around the relationship between diabetes and obesity has seemingly taken the form of: “Which came first, the chicken or the egg?” Does obesity cause diabetes or does diabetes cause obesity?

Both of these conditions can be classified as metabolic diseases and both overlap in genetic and environmental causes, but as we know, not everyone with obesity has diabetes and vice versa.

Regardless of their positions on the underlying causes of obesity, experts today have drawn attention to the experience of excess fat in the liver and the pancreas – which is exacerbated by obesity and which can strongly predict the development of diabetes. The locations in the body where fat is stored (such as in the liver or pancreas) are largely controlled by genetics.

“There are genes that we know affect an individual’s risk for obesity, and those genes can also have an impact in the brain by controlling appetite and weight gain. But other genes associated with diabetes may determine how much your fat cells can actually carry,” said panelist Sadaf Farooqi, a professor of Metabolism and Medicine at the University of Cambridge. “For people with these certain genes, excess fat can spill over and build up in the liver and pancreas, leading to insulin resistance and type 2 diabetes.”

Dr. Lee Kaplan, the director of the Obesity, Metabolism, and Nutrition Institute at Massachusetts General Hospital and an associate professor at Harvard University, largely agreed, noting that where fat is stored in the body plays an important role.

“There is not a one-to-one relationship between obesity and diabetes – not even in those with type 2,” he said. “However, genetic risk for [something like] fatty liver disease [might be] a good model for diabetes, given that these genes can be stimulated by obesity.”

“Liver fat will always go down with weight loss, without exception,” he said. “When a decrease in pancreas fat occurs in people with short duration type 2 diabetes, we saw regaining of function of beta cells. In this regard, only people who are genetically susceptible will get type 2 diabetes, but the level they get it is related to their personal fat threshold. This is underscored by our preliminary data presented at EASD showing that people with type 2 diabetes without obesity could reverse to normal glucose levels by weight loss.”

While standard treatments for weight management and obesity have revolved around lifestyle changes and limiting calories, this approach sometimes fails, especially when individuals attempt to maintain their weight change over the long term.

One solution is bariatric surgery, a procedure that can alter the size of the stomach, and how digested food travels through the GI tract, limiting the feeling of hunger. “The human body can be very resistant to changes in body fat levels, but bariatric surgery can help establish a new baseline fat level,” said le Roux. “Weight loss can be sustained if the person who loses weight is also not hungry and is not compelled to eat much more, causing the body to become OK with a new baseline fat mass. Bariatric surgery can accomplish this.”

In addition to surgery, new pharmaceutical treatments, most of which have only been approved by the FDA over the last two years, can have a similar effect as bariatric surgery because they are designed to reduce a person’s appetite long-term. One of these drugs, semaglutide, is part of a class of glucose-lowering medications called GLP-1 receptor agonists, which have shown to lead to weight loss. Semaglutide is currently sold under the names Wegovy (as a weight management medication), Rybelsus, or Ozempic (both are glucose-lowering medications for people with type 2 diabetes), depending on the dose.

“The therapies that are effective long term start by decreasing appetite until the body stabilizes at a new weight,” Kaplan said. “We see this pattern with drugs like semaglutide, where over time, the brain is convinced that the body does not need as much fat. The drug can change the physiology of the body, which is why this drug can make it easier to maintain a lower weight.”

Though the panelists had different opinions over which of these weight management strategies was the most effective, they all agreed that the best way to maintain a healthy weight long term is to change the body’s set point fat, eliminating the drive to eat more and gain weight even after the treatment is over.

Though experts agree that obesity is a chronic disease that requires medical help, public perceptions around obesity and diabetes have often placed a degree of shame and blame solely on the affected individuals for not taking more responsibility for their health. This stigma around obesity can be extremely harmful and counterproductive in getting people the treatments they need.

“There are few things that compare to the stigma around obesity,” Farooqi said. “If you cannot walk because of a bad leg, or if you have asthma and cannot breathe, we do not blame those people for their illness. With obesity, people are not sympathetic and may even blame you if you do not respond well to treatment. When we support people and families with a positive attitude, it can make a dramatic difference in a short time.”

To combat this stigma, the first step is to recognize that obesity is a disease state and that placing blame on the individual doesn’t accomplish anything. The second step is to stop and to listen to those who are affected.

“Nothing will exacerbate stress like ignoring the people who are dealing with it,” Kaplan said. “Stress causes stigma and stigma causes stress, making it less likely for people to seek treatment.”

An Optimistic Look at the Future

While the obesity epidemic seems to be skyrocketing, we are in a better position than ever before to help people affected by obesity. A greater understanding of the causes of obesity, innovative treatment techniques, and a greater awareness of stigma are all contributing to this effort. Each of the panelists shared their hopes for how these innovations can dramatically alter the current landscape

“Obesity causes four problems,” Kaplan said. “It can make you sick, interfere with treating other non-obesity related diseases, ruin social situations, and impede your economic situation. By losing weight and keeping it off, you can dramatically improve all four of these things. This can do more than any other single intervention in making us healthier and happier.”

Le Roux expanded on the impact that weight loss can have: “We can put diabetes into remission with substantial weight loss, and this can be very disruptive to the disease of diabetes, so I am very excited about new treatment possibilities over the next couple of years.”

Finally, Taylor and Farooqi emphasized the effect that mental health has on all of these treatments. “We need to find better ways to support our patients, starting with the attitudes of healthcare providers about the challenges faced by people with obesity and diabetes. It starts with identifying who will benefit from what treatments,” said Farooqi.

“From our independent psychological examination of people undergoing a low-calorie diet and then attempting to maintain a lower weight, they report improvement in their mental health, going so far as to say, ‘I feel ten years younger.’” Taylor said. Such improvements in the mental and physical health of people with obesity and diabetes is exactly what we should be aiming for, especially with more resources than ever to achieve this.