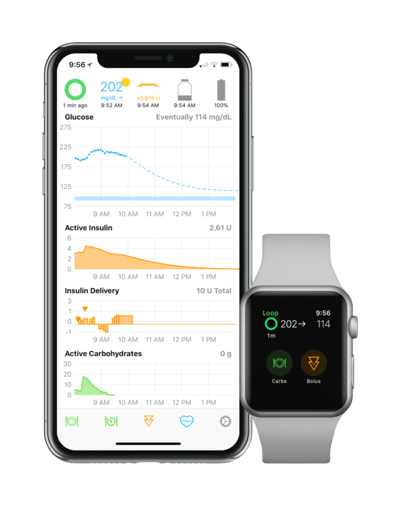 Insulet has announced that Omnipod is the first pump partner for Tidepool Loop, the initiative to get the do-it-yourself (DIY) Loop automated insulin delivery app approved by the FDA, available on app stores, and integrated with in-warranty pumps. For Omnipod users, depending on how this moves forward, this could bring more choice in automated insulin delivery for the tubeless patch pump: Tidepool Loop or Insulet’s own Horizon hybrid closed loop with Dexcom G6.

Insulet aims to launch its Horizon hybrid closed loop system in the second half of 2020, allowing users to control the Omnipod direct from their own smartphone and remain in closed loop even when the phone is out of range. A user would only need to wear the Dexcom G6 CGM and pod, and the Horizon algorithm embedded in the pod would automatically increase/decrease insulin delivery to improve a user’s time-in-range (70-180 mg/dl) and reduce hypoglycemia. The Insulet Horizon smartphone app would allow users to check the system status and take meal boluses, as needed.

Tidepool Loop could be available sooner than Horizon (i.e., before late 2020), depending on how things go with the FDA. Tidepool has also said that it hopes to have many more pump partners for Loop, meaning the automated insulin delivery app could eventually work with a variety of pumps. There are a number of questions to answer, such as responsibility for customer service, etc.

What does it mean for Insulet to partner with Tidepool Loop? The on-body pod would communicate directly with the Tidepool Loop app (via Bluetooth) such that users will be able to control Loop from their own smartphone – no handheld device would be needed, similar to other approaches! The current DIY version of Loop relies on out-of-warranty Medtronic pumps and a communicating bridging device called RileyLink; Tidepool Loop would operate with pumps designed for seamless wireless communication.

Beyond Medtronic’s currently available MiniMed 670G hybrid closed loop, Tandem’s Control-IQ system is expected to launch in summer 2019 – adding automatic correction boluses and using the Dexcom G6. Bigfoot, Beta Bionics, and Lilly are also targeting launches of hybrid closed loop systems in the next two years, though none have entered a pivotal study yet and timing is to be determined. Medtronic also moved up its “next-generation” closed loop expectations recently – we look forward to continuing to follow these developments.