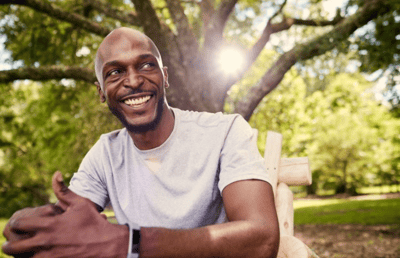 Technologies like CGM and insulin pumps have the potential to revolutionize a person’s diabetes care and management. Unfortunately, too many people with diabetes, particularly people of color and those who are low-income, do not have access to these devices.

When Broadway actor Kyle Banks was diagnosed with type 1 diabetes in 2015 at the age of 38 while in the traveling production for Disney’s, The Lion King, he went to the Children’s Hospital in New Orleans to learn more about managing this condition. There, he found out about the challenges that children face, especially those of color, in accessing continuous glucose monitors (CGM) and insulin pumps.

“I met with the endocrinology department [at the hospital], and they explained to me that many kids of color weren’t tapping into the technology as a way to help their management,” said Banks, who was himself learning how to manage this complex disease as a performer. “There were so many breakdowns occurring between the patients and clinicians due to socioeconomic differences and difficulty with practitioners understanding the various cultures they were servicing. These things were leading to awful outcomes for these kids.”

This realization led Banks to start a nonprofit foundation in 2018 called Kyler Cares, which provides grants for CGM and insulin pumps to children and young adults who have type 1 diabetes who wouldn’t otherwise have access to this technology. Banks started this organization as “a way to promote positive health outcomes for kids living with diabetes,” after benefiting himself from this technology while performing physically demanding shows nightly.

Too many people do not have access to the technology that could help them live happier, healthier lives. Out of the over 7 million people with diabetes in the US who rely on insulin, only about a quarter of them use a CGM, and only about 350,000 people in the US use an insulin pump. Simply put, diabetes technology is vastly underused. Banks said that disparities in CGM and insulin pump accessibility causes diabetes to more severely affect minority populations when it comes to management and complications.

Dr. Ananta Addala, a pediatric endocrinologist from Stanford University, and Terri Lipman, a pediatric nurse practitioner from the University of Pennsylvania School of Nursing, explained the specific connection between A1C and socioeconomic status. “Those at the highest income status have the lowest A1C and those with the lowest income have the highest A1C,” said Dr. Addala.

Additionally, Black and Hispanic children have been shown to have higher A1C and higher rates of diabetes complications, including diabetic ketoacidosis, severe hypoglycemia, and mortality. These complications “range from three to nine times more than that of white children,” said Dr. Lipman. Though these challenges and complications are a result of several factors, “One main driver of disparities in diabetes is access to diabetes technology,” said Dr. Addala.

The role of race and socioeconomic status

According to Drs. Addala, Laffel, and Lipman, similar trends hold true for insulin pump therapy among children with diabetes. Even though overall insulin pump use has increased, the racial disparity has widened: as of 2019, only 26% of Black children were treated with an insulin pump, compared to 65% of white children.

Various studies have suggested that a lack of CGM or insulin pump use has more to do with one’s race than other social determinants of health (such as education, income, and health insurance). For example, “Even in children whose parents had master’s degrees, white children were significantly more likely than Black children to use insulin pumps,” said Dr. Lipman.

The same trend existed among children with parents in the highest income level (greater than $100,000 per year): white children were significantly more likely than Black children to use pumps. Despite having the means to afford a CGM, there was still low pump usage among Black children. According to the study that Dr. Lipman cited, socioeconomic status factors like education and income “do not seem to be the sole or even the most important contributor” to “disparities in treatment method.”

Insurance coverage has also been shown to be a barrier to technology use. People without comprehensive coverage have a harder time affording a pump or CGM given the high cost of these devices. Although youth with government insurance like Medicaid can benefit from diabetes technology, about 65% of children discontinued CGM use primarily due to gaps in insurance coverage.

Implicit bias and racism among providers

Being a person of color does not inherently bar someone from diabetes technology. One of the main factors that leads to such disparities is implicit bias and racism prevalent among healthcare providers. Dr. Addala defined implicit bias as “the unconscious and systematic discrimination or promotion of a sub-group.” She also presented results from her own study that showed how providers tend to exhibit bias toward people with private (or commercial) insurance and ultimately recommend more technology for them versus people with public (or government) insurance.

Dr. Addala cited another study that showed how providers are oftentimes less empathetic to individuals from low socioeconomic groups, contributing to decreased technology access. “Bias and racism among healthcare providers is a real and consequential driver of disparities,” said Dr. Addala.

Bias and racism do affect one’s care, and this is an issue that Banks is deeply passionate about. “There are situations where clinicians don’t even offer devices, which could come from a preconceived notion that people of color cannot afford the technology or that they won’t implement it properly,” he said. “There needs to be a better understanding of the communities that healthcare providers are servicing. Empathy matters: just being able to have a more empathetic approach to care could lead to really great change. When people with diabetes are in these clinician settings, they can feel [the bias], and then they leave the office not having received what they should have received, which is proper care.”

Conversations about health are a two-way street, so if possible, talk to your healthcare team about how you can get access to technology that can help you.

The Kyler Cares program has engaged in conversations with Children’s Hospital New Orleans and Ochsner Hospital in Louisiana to try and give providers a better understanding of the communities they serve and figure out ways to improve the outcomes of people with diabetes.

“We’ve communicated with a number of families and individuals [in these communities] that have experienced negative exchanges with clinicians,” said Banks. “In our discussions with clinicians, we make it a point to highlight the need for more culturally sensitive diabetes health care. I would love to formulate culturally sensitive training for practitioners, and we are discussing within our really small network of social workers how this might be accomplished once funding is available.”

Even once technology becomes more accessible, learning to use that technology can be overwhelming and confusing, which may cause people to give up on using a CGM or pump. “If we’re just prescribing the technology and not helping people understand how to properly implement it and actually use all the bells and whistles that make life simpler with this disease, it can exacerbate the problems,” said Banks. “I can’t stress the need enough for more education, education, education for technology.”

“Navigating the healthcare system can be intimidating for people of color,” said Banks. Kyler Cares is working with Ochsner Hospital in Louisiana to make its endocrinology department more accessible for people who have questions on diabetes technology, especially since everyone has different educational backgrounds. It’s important for providers to match their support with individualized care, individual preferences and goals, and an awareness of social or cultural ideals in order to overcome health disparities and inequities.

“It is essential that we recognize the impact of socioeconomic disparities and structural racism on health care,” said Dr. Lipman. These issues must be addressed to ensure fair and equitable access to CGM and insulin pumps.

Want to help diaTribe expand CGM access for Americans? Join diaTribe Change and sign the petition to tell your lawmakers to support Medicaid legislation giving everyone with diabetes on insulin access to CGM. Learn more here.

To learn more about health disparities, CGM, and insulin pumps, check out the helpful resources below: