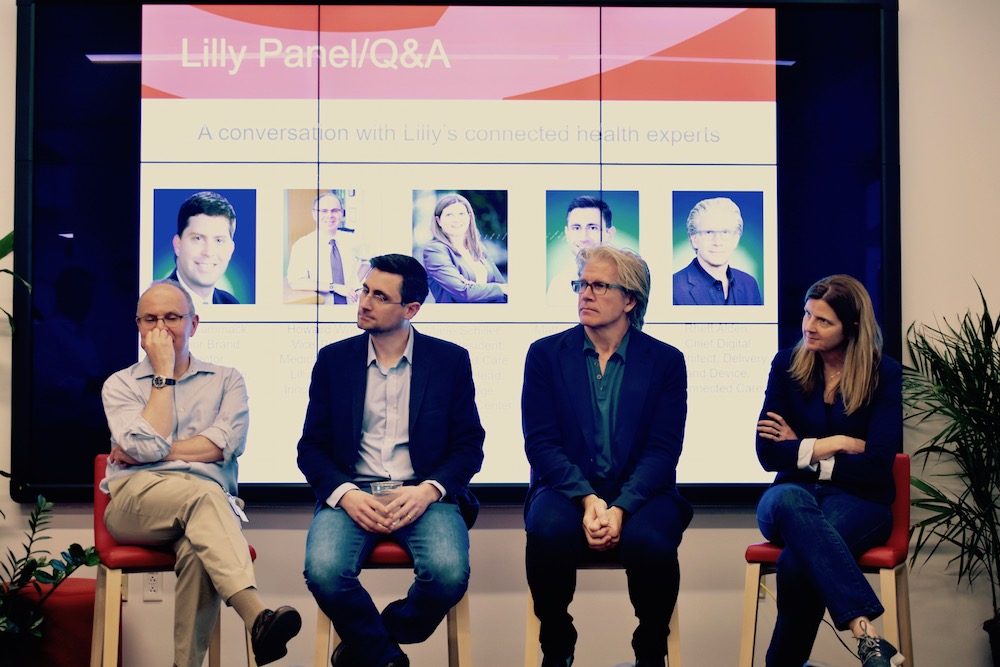 By Jeemin Kwon and Brian Levine

At the Lilly Diabetes Bloggers Summit, diaTribe got to hold a prototype of Lilly’s new, disk-like pump, which will integrate with Dexcom G6 CGM in a hybrid-closed loop system

diaTribe was invited to visit the Lilly Innovation Center in Cambridge to witness the very first public reveal of their automated insulin delivery (AID) system prototype. (For those who are new to diabetes technology, click here for an overview.) From our initial coverage of the system in November 2017, we knew that the system will consist of a custom disk-shaped pump, a Dexcom continuous glucose monitor (today, we learned this would be the new G6!), and an algorithm that adjusts basal insulin delivery every five minutes to keep glucose in range. The system is expected to launch in 2-3 years. At day one of this meeting, Lilly revealed more specifics about their custom pump and paired controller/smartphone app:

Unfortunately, photography was not allowed during this presentation.

In this moment, it is still too early to tell what programs and policies will be put into place to make this technology accessible to more people.

Stay tuned for more info about the dosing algorithm from day two!

What is an insulin pump?

Insulin pumps are devices that deliver insulin without the need for manual injections. In addition to the insulin itself, typical tubed insulin pumps (e.g., Medtronic, Roche, Tandem) require three main components (all of which are connected to the body):

Insulet's Omnipod is a tubeless pump that does not have an infusion set.

What is a CGM?

Abbott's FreeStyle Libre is a different type of continuous glucose monitor, as it does not transmit glucose data automatically; a user must scan a handheld or app over the sensor to obtain a reading.

What is automated insulin delivery?

Automated insulin delivery, or AID, seeks to use CGM and smart algorithms to decide how much insulin to deliver via pump. Also known as an artificial pancreas, AID’s end goal is to remove user input from insulin dosing, reduce hypoglycemia, and improve time in target range. For more info on AID systems in development, click here.

What is a hybrid closed loop?

Hybrid closed loop refers to a type of automated insulin delivery that automates much of insulin therapy, but not all. In this case, basal (background) insulin dosing is controlled by the algorithm, but mealtime insulin dosing (boluses) are still done manually by the user. More automated systems are commonly referred to as “fully closed loop” systems.