Stem Cells and the Search For a Type 1 Diabetes Cure 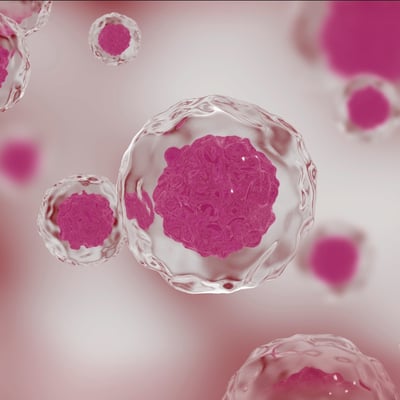 In recent years, researchers have increasingly looked to stem cell–based therapies as one strategy to find cures for chronic conditions like type 1 diabetes. But what exactly are stem cells, and how can they help treat diabetes?

In type 1 diabetes, the body is no longer able to regulate blood glucose levels. This is because the immune system, a network of cells and proteins that protect the body from infection, mistakenly attacks and destroys the body’s own cells that produce insulin. Insulin is a hormone whose main job is to allow the uptake of glucose into the body’s cells to be used for energy (these insulin-producing cells are located in the pancreas and are called beta cells.)

For decades, diabetes researchers have searched for ways to replace destroyed beta cells with functioning ones. In the early 1990s, a team at the University of Alberta in Edmonton, Canada,  improved the method for transplanting beta cells from deceased donors into people with type 1 diabetes, which advanced the success rate and safety of the procedure.

Although transplantation allows some people to stop taking insulin for a period of time, there aren’t enough donors to supply healthy beta cells for the roughly 8.7 million people with type 1 diabetes worldwide. Also, transplant recipients must take strong immune-suppressing drugs to keep their bodies from rejecting the donor cells.

By using stem cells instead of beta cells from a deceased donor, researchers hope to make progress towards a cure. But what exactly are stem cells?

Stem cells are young, unspecialized cells that have not yet developed into one of the many different types of cells (nerve cells, muscle cells, beta cells ) in the body.

Adults and children have stem cells throughout the body in bone marrow or fat, that turn into cells allowing the body to heal. There are also embryonic stem cells, which come from embryos that are three to five days old.  Under specific conditions and given the right biological “instructions,” a stem cell can develop into any one of these cell types.

Researchers are working to grow a potentially unlimited supply of healthy beta cells from stem cells, allowing the original stem cells to multiply and mature in a lab. This process would address the healthy beta cell supply issue.

However, the supply of beta cells is only one of the issues. Once these stem cells mature into beta cells, the issue of the immune system attacking and destroying them still remains.

Although stem cells are grown in the lab and do not come from the person who has type 1 diabetes, when implanted, their immune system will see the insulin-producing cells as foreign and dangerous—and target them for destruction. (The individual’s immune system is also targeting and destroying the body’s own healthy beta cells, which is the cause of type 1 diabetes.) For stem cell–derived beta cells to be used on a large scale to treat type 1 diabetes, researchers will have to find a way to stop the immune system from attacking the transplanted cells without the need for potent immune-suppressing drugs.

Researchers have considered several strategies to stop the immune system’s attack without the use of drugs. One is “encapsulation”; healthy beta cells are put into a container or “pouch” that creates a physical barrier and protects them from the immune system. These pouches are made with materials that allow the beta cells to release insulin and get nutrients from the blood without allowing the immune system to attack them. Encapsulation alone, however, may not be the answer as the body can wall off the container of beta cells and prevent the cells from receiving needed nutrients from the blood. It can also prevent the insulin made by the cells from getting into the blood.

When a foreign material, like a virus or a transplanted beta cell, has a genetic “signature” that is different from the person’s own cells, the immune system targets it to be destroyed. CRISPR, however, makes it possible to alter the genetic code (or DNA) of a group of cells with extreme precision. This method is commonly used to create medications, agricultural products, or genetically modified organisms, and could potentially be used to change the genetic code of stem cell–derived beta cells so that the immune system does not detect them.

Stem cell therapies for type 1 diabetes are still in the early stages of research; however, there have been several hopeful developments in the last few years.

Some companies have been conducting clinical trials during the past year to fine-tune the new strategies in terms of creating enough healthy beta cells and stopping the immune system’s attack.

In June, clinical trial data were released from the first two people to receive stem cell therapy: After 270 days, one of the individuals improved his time in range from 40% to over 99%, and he was able to stop taking insulin. However, he did have to take immune-suppressing drugs.

Note: Recommendations suggest a time in range goal of at least 70% for people with diabetes.

Encapsulation and CRISPR technology are still being investigated in a clinical trial of about 70 people with type 1 diabetes. A documentary entitled, The Human Trial, which covered the researchers and patients who first used this experimental treatment, premiered in June 2022.

Although there is still a long way to go, these researchers are laying the groundwork towards developing a cure for type 1 diabetes that can be used on a large scale. For more about stem cells and type 1 diabetes, read: