Taking a Break From Your Insulin Pump 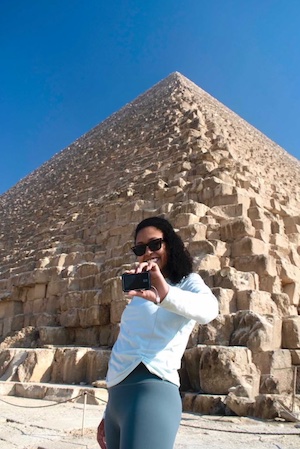 Every now and then you may take a break from your diabetes technology. diaTribe’s Social Media Manager Eritrea Mussa Khan shares her experience taking a break from pumping and speaks to another member of the diabetes community to learn more about their experience as well.

For many people living with diabetes, access to technology can be a game-changer. Continuous glucose monitors (CGMs) and insulin pumps have changed the way people manage their diabetes worldwide.

While having this technology can be beneficial, it does beg the question – is constant attachment to a medical device, and the barrage of data that it provides you, draining? Is taking a break possible? And what should you do if your pump fails at the worst possible moment, when you least expect it?

The night of this year’s Oscars, I was awake with the rest of the world consuming my Twitter feed, chuckling at the memes that the evening produced. It was late, and my pump, the Tandem t:slim X2, started beeping, signaling low battery. When it finally got to 10%, I decided to plug myself in for the night. That’s when it happened – my pump simply would not charge.

I bent the cable in every direction before calling the manufacturer for support. After four calls, six hours, and a “your pump is out of warranty” conversation later, I was completely out of luck with a dead pump and only short-acting insulin on board. As my blood sugar started to rise, at around 4:00 am, I made the decision to take long-acting insulin. I felt that if I didn't make an immediate decision, I might develop diabetic ketoacidosis (DKA) and risk making a trip to the hospital.

Fortunately, I had some insulin (Levemir) in my fridge and decided to immediately take my old dosage. Exhausted and burnt out, I went to bed, sleeping about three hours, before waking up to make sure my blood sugar was still stable.

At that point, I also decided to call my endocrinologist’s office near my home in Dallas for an emergency check-in/appointment, in advance of my plans to travel to Miami. They were able to fit me in pretty quickly, and after a brief conversation (and the realization that sleeping without an infusion set and tubing attached to me was quite comfortable), we made the decision that I should go on multiple daily injections (MDI) for a few days until I received a new device from the pump manufacturer and came back from vacation.

Looking back, I wanted (and maybe needed) a break from my insulin pump. After 3 years of constant alarms and issues with insertion sites, I felt taking time away from my pump would be a welcomed change. However, suddenly changing my routine made it one of the toughest weeks of my life for my diabetes management.

Using long-acting insulin injections wasn't as easy as being on my pump, and I felt like I had to monitor my glucose levels a lot more carefully. I also seemed to be really low the entire time I did MDI, and it felt like I was on an exhausting diabetes rollercoaster of highs and lows from which I couldn't wait to get off.

As most pump users know, there's a freedom gained when you’re on an hourly basal rate. You can detach your pump or suspend insulin if you've maybe taken too much at a meal, but when you're on MDI, once you've injected, that's that. Waiting out those lows (or frustrating highs) wasn't fun, and it made my vacation in Miami a lot less fun. I wonder if I could have done something to make it easier on myself, but either way, after nine days off, I started back on my pump and have been happy ever since.

The time I spent on MDI did make me wonder, however, if there were other people with diabetes who successfully take breaks from their pumps and CGMs. And if so, how are they doing it?

I spoke with a friend of mine, Paloma Guerrero, who lives in Arizona and, like me, lives with type 1 diabetes. She explained that she typically switches between MDI and pumping depending on what is happening in her life, but that she also had a situation where her pump gave out on her unexpectedly, and she was forced into an emergency MDI situation.

Because it is often hot and sunny where she lives, being in the water is one of Guerrero’s favorite places to be. Swimming is a regular part of her routine, whether it's for leisure or for exercise. But this can be a challenge when hooked up to a pump. She noticed that when in the water for a longer period of time, the pump would malfunction and the adhesive would fall off.

One day, while carrying her detached pump, she accidentally dropped it in a water cooler. She had experience with switching between MDI and pumping for a short time, but this was the first time since her diagnosis that she had to use MDI for a longer period of time (Her pump was also out of warranty, which complicated things further).

After a call to her endocrinologist, they decided that her best course was to try using a long-acting insulin while her pump was being repaired, and Guerrero said she actually liked the flexibility it gave her. After some additional conversations with her healthcare team to tweak the dosage, they worked together to figure out the correct long-acting dose. She was able to get a new pump within a few days, but she decided to stay on MDI.

Not having a pump might mean that you have to be more mindful about the diabetes supplies you carry around, such as extra insulin, syringes, etc. However,  there can be some mental and lifestyle benefits gained by taking a break once in a while. “Both systems allow for freedoms in different ways,” said Guerrero, who said that taking a break from her pump meant she felt less self-conscious about how visible her condition was. This can sometimes be a plus for her when she goes out dancing or when she has to go through metal detectors at concerts. Life is simplified when you don't have to consider an additional medical device.

Guerrero compared the two experiences to driving a vehicle. “MDI is just like driving a manual transmission, while pumping feels more automatic,” she said. “I’m on MDI by choice, not by force.” In the end, she developed a system that works for her.

Technology available to people with diabetes these days has come a long way. While there are benefits to being on a closed-loop or a pumping system, such as being able to sleep in and being able to suspend your insulin dosage if needed, diabetes is supposed to fit in our lives, not the other way around. Whatever system works for you, know that it can always be adjusted to better fit your needs and your life.

To learn more about switching technologies and finding the right combination that works for you, read “Finding the Right Tech for Me,” by Justine Szafran.

Eritrea Mussa
Eritrea Mussa Khan joined diaTribe as Social Media Manager in February 2022. Having lived with type 1 diabetes for 20 years, Eritrea has worked in the Diabetes Space as an... Read the full bio »
Do you recommend this article?
Yes