​​Type 1 Cures: A Sneak Peek into the Lab 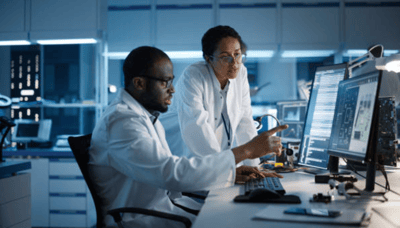 As scientific researchers continue to make strides toward a cure for type 1 diabetes, diaTribe sat down with Sean Kramer, the CEO of the Diabetes Research Institute Foundation and a person with type 1 himself, to discuss the latest in the search for a cure.

As we welcome the new year, there is much to be (cautiously) optimistic about in diabetes research. In a look back at 2021, researchers and the diabetes industry continue to improve their understanding of how the pancreas secretes insulin. The release of new automated insulin delivery (AID) systems and continued improvements using artificial intelligence algorithms have brought us even closer to a fully closed-loop artificial pancreas.

Beyond the advancements in diabetes technology, however, researchers are also exploring solutions to type 1 diabetes that involve replacing a person’s malfunctioning beta cells with healthy ones.

As many with type 1 are aware, this form of diabetes is caused by an autoimmune process where the body’s immune system attacks the beta cells of the pancreas. These are the cells responsible for producing insulin. If researchers could somehow replace these defective cells and stop the immune system from attacking, this could restore natural insulin production in the body – in theory, a cure for type 1. It is here that researchers at the Diabetes Research Institute (DRI) have primarily focused their attention. The DRI Foundation (DRIF), which funds these research endeavors, was created for the sole purpose of finding a cure for diabetes.

“DRIF believes in a biological [or cellular], not technological, cure for diabetes,” Sean Kramer, CEO of the DRIF and a person with type 1 diabetes, told us. Kramer marks the fourth generation in his family to be affected by diabetes. “I have three daughters, so it’s terrifying to me that even one, or all of them, could develop type 1 later in life. I’d like to get to the point where I can say that my children don’t have to worry about this disease.”

Researchers have grappled with a cure for type 1 that involves replacing the insulin-secreting beta cells inside the islets. “The DRI pioneered islet transplantation over 20 years ago,” said Kramer. “In a follow up with some of these people, the results have been nothing short of phenomenal. For some, islet cell transplantation is a functional cure for type 1 diabetes; there are no two ways around it.”  However, islet transplantation currently requires that the recipient take broad spectrum immunosuppressive therapy everyday of their lives which is not feasible for most people.

He explained that research teams at DRI focus on three different lanes of islet cell therapy: “site” involves placement of the implanted cells in the body; “supply” involves maintaining a consistent source of insulin-producing cells; and “sustain” involves keeping those implanted cells protected from the immune system.

In 2021, Vertex Pharmaceuticals succeeded in delivering the first successful beta cell transplant derived from stem cells. One of the major differences between the two research groups is where the transplanted cells are coming from. While DRI had previously used islets from the pancreases of human donors, Vertex specifically manufactured beta cells in the lab using stem cells, or cells that had not yet matured into the many different types of cells that exist in our bodies. By giving these cells special instructions, researchers have now been able to turn them into insulin-producing beta cells.

DRIF focuses on complete islet transplantation from donor to recipient – which means the entire islet including beta cells (which make insulin), alpha cells (which make glucagon), delta cells (which make somatostatin, another type of hormone) and other cells are transplanted. For Vertex, these components of the islets are constructed from stem cells and are infused through the blood stream near the pancreas.

However, despite the astonishing success stories coming from each of these methods, several barriers remain. “The challenge [with islet transplantation] now is that it requires people to go on anti-rejection medications (broad spectrum immunosuppressive therapies), which present their own set of issues,” said Kramer. “We are still trying to answer the question of whether islet cell therapy will be a cure or the cure for type 1. Our goal now is to make transplants safer and avoid the need for potent immunosuppressants.”

Kramer mentioned several projects in the research pipeline that aim to tackle this problem. One of these is a drug called dimethyl fumarate (DMF), which has previously been used to treat multiple sclerosis (MS). Like type 1 diabetes, MS is also an autoimmune condition, resulting in an immune attack of the protective covering of nerves, leading to vision loss, poor coordination, and nerve cell damage.

According to Kramer, researchers at the University of Miami have “received a significant grant to look at DMF in people with type 1, which is showing fantastic results so far.” DMF is only now being tested as a way to preserve beta cell function soon after a type 1 diagnosis. While DMF appears to keep the immune system from attacking beta cells (or nerves in the case of MS), studies have shown that DMF does not promote infection, nor does it weaken the body’s response to infections or vaccinations – a common concern with potent immunosuppressants.

Another type of drug, called an anti-CD40 ligand (CD40L), is now being researched as a possible method of safely limiting the immune system’s attack on pancreatic beta cells.

CD40L first came about as a therapy to slow the progression of ALS, also known as Lou Gehrig’s disease. CD40L drugs have been studied for several years as a way to prevent the progression of several autoimmune diseases beyond ALS, but was “reformulated in recent years and is just now being tested for safety in people with type 1 diabetes who have had an islet cell transplant,” said Kramer.

When people undergo an islet transplant, the body’s immune system attacks the implanted cells almost immediately by causing an inflammatory response in and around the cells. Researchers believe that this process is mediated through a cellular protein called CD40. CD40L drugs may block this response, which is how the drug could stop the body from destroying the implanted beta cells. According to Kramer, “We are expecting FDA approval at any moment for a human trial as it relates to islet cell transplantation.”

While many of these goals will take several years to reach, the groundwork for a biological [or cellular] cure is in place. Beyond the current research on improving the safety of islet cell therapy and regulating the body’s immune response, Kramer hopes to steer the DRIF toward preventing the onset of diabetes by better identifying those who may be susceptible.

“As we look to the future at the DRI, I am a huge proponent of preventing type 1 diabetes in people who don’t already have it,” he said. “Once you’ve gotten a type 1 diagnosis, it’s much harder to treat or reverse. As the incidence of diabetes continues to rise, we will need to get to a point where we can identify people earlier on. I’ll be very interested to see where the research into prevention takes us, so stay tuned.”

The DRIF remains steadfast in its mission to cure type 1 diabetes. For more about research on cures, read, “Tackling Type 1 Diabetes – Where are we on Technology and Research?” For more about islet cell therapy, check out our article on the subject, “Stem Cell Therapy to Cure People with Type 1 Diabetes.”