Why I Keep Participating in Clinical Trials for Diabetes Innovations 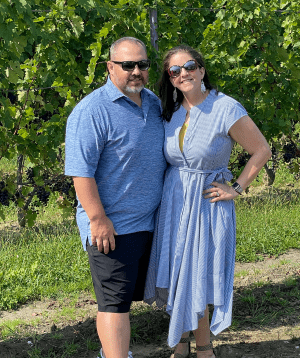 Participating in clinical trials are a way for people with diabetes to be directly involved in the evolution of diabetes care. Julie Heverly shares her experience being hooked up to seven continuous glucose monitors during a clinical trial and why she believes they are so important.

Living with type 1 diabetes is challenging, and just about every single person I’ve ever met living with this condition wants things to get better – whether that’s a cure or more effective and more affordable medicine and therapies. But it isn’t enough to simply “want” that.

After my diagnosis during my junior year of college, I went through the initial grieving process, eventually coming to a realization. Things weren’t going to just get better. My health wasn’t just going to improve. My life with diabetes wasn’t just going to evolve from vials and syringes to an automated insulin delivery (AID) system without research being done, so I thought I might as well be part of the effort to help myself and countless others.

At this time, I knew very few people with diabetes and almost no one with type 1. The people I knew with diabetes had a different disease: type 2 diabetes. They took oral medication, a daily walk, and they seemed to be able to manage their glucose just fine. I, however, unsuccessfully chased my numbers with insulin injections, juice, and exercise. My instincts told me that there had to be a better solution, and if there wasn’t, I needed to do something about that too.

Four years into life with diabetes, I completed what, at the time, was a comprehensive application from my insurance company to justify my request for my first insulin pump. When it was finally approved and I received my training I was overwhelmed. This new technology was life changing. I was so grateful for it, and it made me want to be more involved with communities and groups that were pushing for advancements in diabetes care.

Since 2002, I have committed my free time, my career, my resources, and yes, even my body to help these advances in diabetes care. A major part of this included taking part in several clinical trials. One was just a daily questionnaire on my smartphone. Another was a collection of cognitive tests in a lab. But the most interesting clinical trial, and in my opinion the most helpful to me and others with diabetes, was one of the continuous glucose monitoring (CGM) sensor trials.

Back in 2009, I was seeing an endocrinologist and diabetes healthcare team at Thomas Jefferson University in Philadelphia, PA. When I saw a flyer with trial information taped to an exam room wall, I immediately asked my endocrinologist about it. He spoke highly of the researcher and thought I would be a good candidate for the research. It was a clinical trial for CGMs intended to help improve their accuracy and the experience of wearing a CGM sensor.

Wait – I could help make CGM sensors better, more accurate, and more comfortable? I signed up immediately and was accepted to participate.

The day of the trial, my husband drove me to Jefferson’s campus in Philadelphia and dropped me off outside of an old university building I had never seen before, with the promise that he would return for me in 12 hours. I checked in at the front desk and was escorted to the elevators. As I slowly worked my way through the bowels of this building, my imagination kicked in and my nerves started to unravel. Just as I thought about turning back, I stumbled upon the trial team, all waiting for me with smiles and eager anticipation.

The trial itself was relatively straightforward. I was fitted with a plethora of CGMs: two FDA-approved sensors that were already on the market, two newer sensors that had not yet been approved, and two CGMs that were intended to be specifically used by people while being treated in the hospital.

All six sensors were inserted into my abdomen – truly the only “six-pack” abs I’ll ever experience. I had already adopted CGM technology by this point and didn’t have to remove my personal device for the test, so there I was with seven CGMs inserted and activated in my mid-section and my insulin pump disconnected for the day. The assortment of medical devices inserted into my body, which limited my mobility, and artificially replaced the functions of healthy human parts, started to make me feel like a Frankenstein creature that I dubbed “Juliestein.”

Once the research team attached all the sensors, my right and left arms were connected intravenously to a bag of insulin and a bag of glucose. I did not eat or drink for the entire time while my blood glucose levels were artificially controlled by the bags’ contents and monitored by the various CGMs. I was in a hospital bed for 12 hours as the research team raised and lowered my glucose repeatedly to record the different CGM sensors’ ability to accurately monitor my glucose levels.

I was so excited at the idea of a more accurate CGM that I hardly minded that I looked and felt like Frankenstein’s monster or that I was going in and out of hypo- and hyperglycemia.

The trial team and I watched TV and chatted while my glucose levels were monitored. From a mental and emotional perspective, it was purposeful boredom. It was, however, physically challenging.

My glucose rollercoaster was not embraced by my body. I developed a migraine, and my veins started collapsing about ten hours into the trial. This led to issues that ultimately meant the trial ended a little earlier than planned – with a level three hypoglycemic episode and an ever-trusty juice box.

My husband arrived a bit early to pick me up and was ushered into the room where I lay in all my “Juliestein'' glory. His initial expression of horror at seeing his wife hooked up to multiple medical IV poles and my CGM six-pack on full display was hilarious to me. The experience turned out to be a great dry run for being in the operating room during our daughter’s birth a few years later.

When the trial ended, I was disconnected from all of their devices and properly reconnected to mine. The team thanked me profusely and instructed my husband to monitor me closely. That night I recall being quite difficult. I was intensely hungry, but my stomach rejected food. My headache persisted, and my body felt as though it had been hit by an 18-wheeler, yet I awoke the next morning and resumed normal life.

There was no follow-up from the trial, no formal acknowledgement of the results or next steps based on the learnings. But that wasn’t why I volunteered for the trial in the first place. I participated in the trial to help improve care options for myself and for others.

Two years later, I wore the latest version of the CGM throughout my healthy and stable pregnancy. It was a remarkably better, more accurate, and more comfortable sensor than the first CGM I wore when I started my CGM journey five years prior. A decade later, I still credit my healthy pregnancy to that CGM technology and the information it provided.

The continued evolution of CGMs continues to amaze me. Every iteration is an improvement over the last, and behind every version are real people participating in clinical trials to provide the data needed to understand the effectiveness and safety of the device.

I do believe that my small part in that trial contributed to the evolution of CGMs and diabetes care. It’s not enough to want better options. Every person with diabetes who can, should be a proactive advocate in the search for solutions. I would, and should, do it again, and I encourage you too as well!