Zegalogue – New Emergency Glucagon Approved for Adults and Kids in US 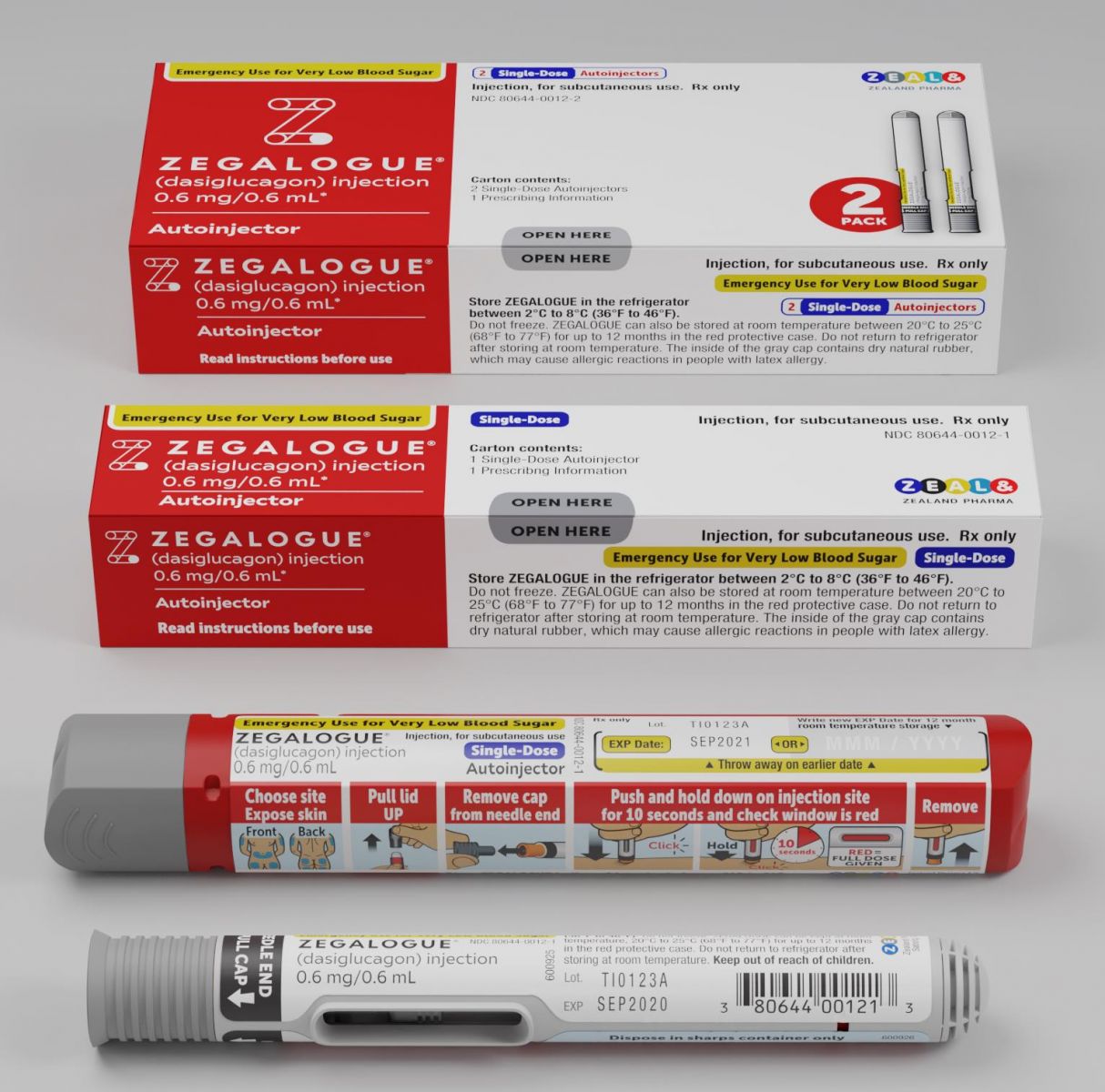 Zegalogue emergency glucagon comes as a pre-filled injection or auto-injector pen and can be used to treat severe hypoglycemia quickly.

Zegalogue (also known as dasiglucagon injection) was approved by the FDA in March to treat severe hypoglycemia in people with diabetes over the age of six. Zegalogue is made by Zealand Pharma, a biotechnology company founded in Denmark in 1998. The new emergency glucagon is now available in June as a pre-filled syringe or an auto-injector device.

Severe hypoglycemia occurs when a person’s blood sugar levels are too low to supply the needs of the brain. When this happens, that person may become unresponsive or have a seizure. In these emergency situations, glucagon can be used to quickly raise blood glucose levels. Glucagon is a hormone (a natural chemical made by your body) that prompts the release of sugar stored in the liver into your bloodstream.

A Canadian study found that people with diabetes (type 1 and type 2) experience severe hypoglycemia an average of 2.5 times each year. And, according to Zealand, 7% of youth on insulin experienced hypoglycemia in the last six months.

Clinical trials found that Zegalogue can raise glucose levels and resolve severe hypoglycemia much faster than traditional rescue glucagon. The data show that taking Zegalogue (0.6 mg) during a severe hypoglycemia episode can raise blood glucose levels by at least 20 mg/dl – what’s considered a recovery stage – within about ten minutes. By comparison, traditional rescue glucagon injections can take 30-45 minutes to achieve this same effect.

Almost all adults in the trial (99% of participants) recovered and returned to non-hypoglycemic blood glucose levels within 15 minutes of taking Zegalogue.

Zegalogue joins Baqsimi and Gvoke as a next-generation rescue glucagon. Each of these glucagon options have been shown to resolve hypoglycemia fast and effectively, and without the need to mix dry powder and liquid – that’s what classifies them as “next-generation.”

Zealand launched a comprehensive patient support program, Zealand Pharma ConnectedCare, that includes affordability resources, reimbursement, and educational support. Eligible individuals can use a co-pay savings card (which allows up to two Zegalogue fills for $25), receive free shipments of Zegalogue to their homes, and access other forms of assistance.

People with diabetes who are on insulin or glucose-lowering medications like sulfonylureas are at the greatest risk of severe hypoglycemia. To learn more, read Hypoglycemia Preparedness: How to Know Before You Go Low.

Want to learn more about severe hypoglycemia and next-generation glucagon? Our diaTribe Musings event, Taking the Fear out of Low Blood Sugar: Next-Generation Glucagon, featured representatives from the companies that make emergency glucagon. Click here to read highlights from the event.

Editor's note: This article was first published on April 5, 2021 and has since been updated.