Can You Have DKA Without High Blood Sugars? 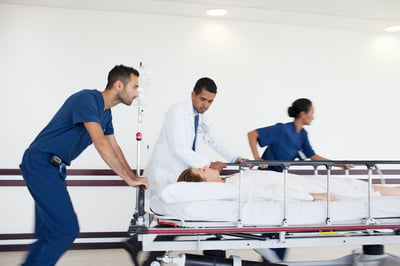 Diabetic ketoacidosis (DKA) is a potentially fatal complication of diabetes typically associated with dangerously high blood glucose levels. However, this is not always the case, specifically for those who take a new class of diabetes drugs called SGLT-2 inhibitors.

Diabetic ketoacidosis (DKA) occurs when someone does not have enough insulin in their body. Because there is not enough insulin to allow glucose to enter the body’s cells from the blood to be used for energy, the body responds by burning fat.

When this happens, ketones are produced, which can build up in the bloodstream. Ketones are acidic, so when ketone levels get too high, the blood can become acidic, which affects the function of the brain and other organs, and can be life-threatening.

While people often associate DKA with high blood glucose levels, many don’t realize that they can become ill from ketoacidosis when their blood glucose is under 240 mg/dl. A rare type of DKA, called euglycemic diabetic ketoacidosis (EDKA), occurs when blood glucose is not elevated, but there isn’t enough insulin in the body to prevent the breakdown of fats. Cases of EDKA have occurred in people with type 1 and type 2 diabetes.

Since the introduction of sodium glucose cotransporter-2 (SGLT-2) inhibitors, emergency rooms have seen an increase in cases of EDKA. Current estimates peg EDKA cases at 2.6 percent to 3.2 percent of all DKA cases seen in ERs—though this percentage might be low, due to underreporting.

A new cause of rare DKA

SGLT-2 inhibitors, sold under the brand names of Jardiance, Invokana, Farxiga, and Steglatro, help reduce blood glucose by preventing reabsorption of glucose in the kidneys. Instead, the body gets rid of the excess glucose through the urine. The FDA has approved SGLT-2 use for people with type 2 diabetes only.

Some physicians, however, have prescribed SGLT-2s off label to people with type 1 diabetes. Many people taking both insulin and an SGLT-2 benefit from lower glucose levels, fewer post-meal ups and downs, and weight loss, all without an added risk for hypoglycemia.

Once a SGLT-2 drug enters the picture, though, the risk of euglycemic DKA is 5 percent to 10 percent higher for people with type 1 diabetes than those not taking that medication.

Euglycemic DKA is much trickier for people with diabetes to discern, though, because the classic tip-off of sustained, elevated blood sugars is absent. Blood sugar is below – sometimes well below – 240 mg/dl.

One recent case study described a person with type 1 who was experiencing euglycemic DKA with blood sugar around 75 mg/dl.

Knowing when to check

If high blood sugars do not alert people with type 1 to check their ketone levels, what should they look for instead?

According to Dr. Charles Alexander, a Pennsylvania-based clinician and medical advisor to diaTribe, euglycemic DKA presents with many similar symptoms of classic DKA, including:

At the first sign of any type of DKA, test ketone levels, even if blood sugar levels are within range. If you see elevated ketones, start hydrating aggressively as able, suggests Dr. Julie Hendrix, an endocrinologist in private practice in Franklin, Tennessee. She says it’s also important to take insulin and to consume a fast-acting carbohydrate, ideally a glucose-containing fluid such as apple juice.

Typically, taking an SGLT-2 by itself is not what triggers an episode of euglycemic DKA. Other factors combine with the action of SGLT-2s to act as triggers.

Many factors are related to some type of so-called starvation (when the body is unable to use, or does not have enough carbs for energy), such as:

The idea of both taking insulin when glucose is in range, and consuming carbs if DKA is suspected, are highly counterintuitive to most people with type 1. But without enough insulin and glucose, ketone levels will continue to rise, even if blood sugars are in range. Consuming carbohydrates with insulin helps switch the body back to seeking energy from glucose, rather than fat. That fuel switch stops the liver from making glucose from fat, which halts ketone overproduction.

When persistent vomiting is present, all bets are off: seek IV hydration and medical treatment immediately.

At the emergency room

Not long after the drug Invokana went on the market in 2013, people with both type 1 and type 2 started showing up in emergency rooms with euglycemic DKA.

Because EDKA is quite rare and health care providers had been taught that DKA only occurs when blood glucose levels are high, many emergency room (ER) professionals were deceived by blood sugars that were in a normal or slightly elevated range, and initially dismissed the possibility of DKA. Eventually EDKA was diagnosed, but many more hours passed than would have if high blood sugars had been present.

Emergency room physicians have written many case studies about EDKA since then:

Many of these case studies stress that all people with diabetes who take SGLT-2s should be considered as potentially in DKA if they come to the ER, and that appropriate laboratory tests be run to confirm or rule out that diagnosis.

Yet not every ER professional knows what EDKA is, or will know to order the correct lab tests to detect it. It’s a very frightening prospect—you’re in the hospital because you know you are very ill, and have a good idea why, but your input is dismissed and you are not receiving the correct treatment.

In Lessons Learned from A Scary Visit to the Emergency Room, Stefany Sheehan, the parent of a child with T1D and member of the board of trustees at Joslin Diabetes Center, breaks down her daughter’s experience with EDKA after taking an SGLT-2 inhibitor.

How can you avoid that scenario?

You can also take copies of articles with you to give to your ER team if necessary. In addition to letting ER personnel know you are well educated about your diabetes, you may also save them time doing research about EDKA and SLGT-2 inhibitors.

If you cannot get through to the medical team in the ER, ask them to call an endocrinologist from the hospital to consult, if there is one available.

The specter of any type of DKA is concerning to people with type 1. Understanding how it can happen, how to detect it early, and how to advocate for yourself should help those taking SGLT-2s keep themselves healthy and far away from a DKA emergency.

Jennifer Alvey
Jennifer Alvey is a writer and editor based near Nashville, TN. She has written extensively about wellness, career, business and technology. She is a Type 1 veteran, diagnosed when home... Read the full bio »