ADA 2020 is officially in the books! Here are some more of our highlights from the last day and a half of ADA’s virtual 80th Scientific Sessions: Teplizumab, Control-IQ, SGLT-2s and GLP-1s, time in range, food as medicine, and more!

Our team wrapped up our coverage of ADA’s 2020 Scientific Sessions. Below you will find highlights from Day #4 and Day #5, including medicines that show promise for preventing diabetes-related health complications (and even diabetes onset!), real-world Control-IQ data, a functional food as medicine program, and the effects of health policy on diabetes care.

A huge thanks to all the researchers, healthcare professionals, diabetes advocates, conference organizers, and attendees who helped create such intriguing virtual Scientific Sessions. You can read our coverage from day 1, day 2, and day 3, and stay tuned for our upcoming article with all of the highlights from this year’s conference!

New follow up data, presented by Dr. Emily Sims (Indiana University), showed sustained reduction in the onset of type 1 diabetes. Previously, teplizumab had been proven to delay clinical onset by only two years in high-risk people; however, these new data support a delay of as much as three years, compared to placebo.

Furthermore, people who were treated with teplizumab showed a “striking reversal” in C-peptide decline (this is a common measure of type 1 diabetes) in the six months following treatment, after which C-peptide levels seemed to stabilize. These data suggest that the treatment helped stabilize beta cell function (the cells in the pancreas that make insulin) and that repeated teplizumab treatment at key time points may be able to further extend, delay, or even prevent diagnosis of type 1 diabetes. While not a cure, three years of living without daily diabetes management is certainly a meaningful outcome.

When will teplizumab become available? With an estimated six-month review time if Priority Review is granted, an FDA decision could be expected as soon as mid-2021.

The first poster, Control-IQ Technology in the Real World: The First 30 days, included at least 30 days of pre- and post-Control-IQ data from 1,659 participants. During the first 30-days of Control-IQ use: 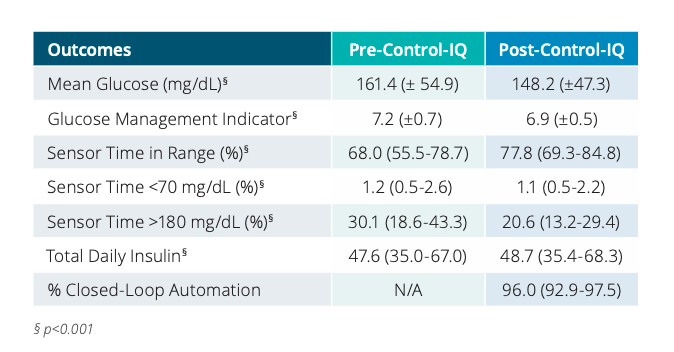 We learned so much at ADA about improving time in range, and we were moved by the power of automated insulin delivery in doing so, since it shows much greater time in range with what sounds like so less work for people and their healthcare teams.

To learn more about Control-IQ, check out the following articles:

A1C vs. Time in Range – Which Should be Used for Children with Diabetes?

A panel discussion of leading experts, moderated by JDRF CEO Dr. Aaron Kowalski, focused on the pros and cons of using A1C and time in range as primary metrics in diabetes care and management for children. As they debated the best marker of glucose management, they attempted to define the ultimate “goal” of diabetes care: is it preventing complications, spending less time in hyperglycemia and hypoglycemia, or improving mental and emotional wellbeing?

Dr. William Winter presented extensive evidence that A1C can predict a person’s risk of developing complications (kidney disease, heart disease, retinopathy, and neuropathy). While lower time in range has been associated with microvascular complications, experts agree that more studies are needed to determine its predictive accuracy for long-term outcomes. Dr. Thomas Danne presented results from the SWEET project that furthered the case for A1C as a measure of population outcomes: setting ambitious targets based on A1C could lead to significant improvements in outcomes for children with type 1 diabetes. 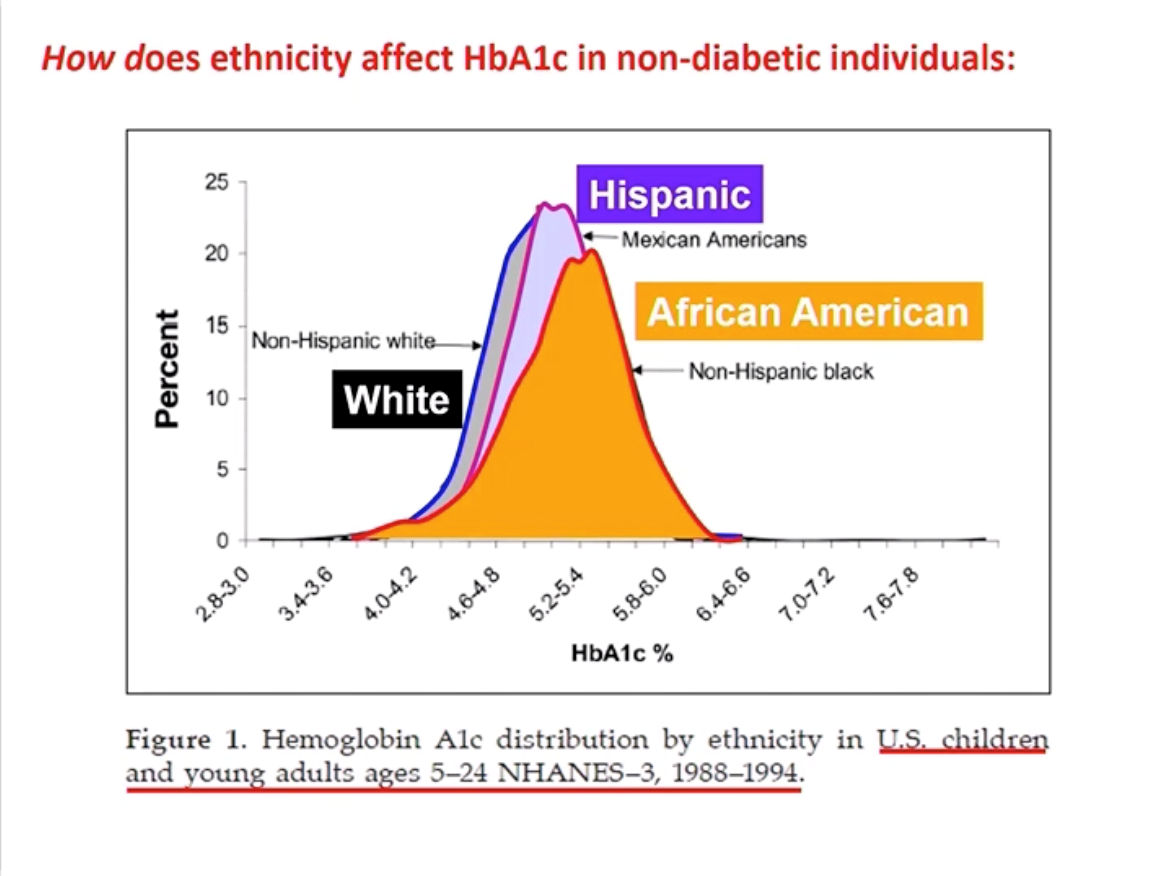 Experts discussed cases in which A1C can be misleading and time in range may emerge as a more reliable measure of glucose control. Dr. Winter explained that population A1cs differ among racial and ethnic groups, leading to misdiagnosis (for example, African Americans have a higher A1c on average compared to white people). Very importantly, as diaTribe has reported on for many years in Beyond A1C research, A1C also does not demonstrate hypoglycemia, hyperglycemia, or glucose variability. According to Dr. Danne, healthcare professionals find CGM reports more helpful in identifying daily highs and lows and in adjusting therapy. This technology allows them to better work alongside families to set individual and measurable goals based on time in range – it is terrific to hear about this continued teamwork. 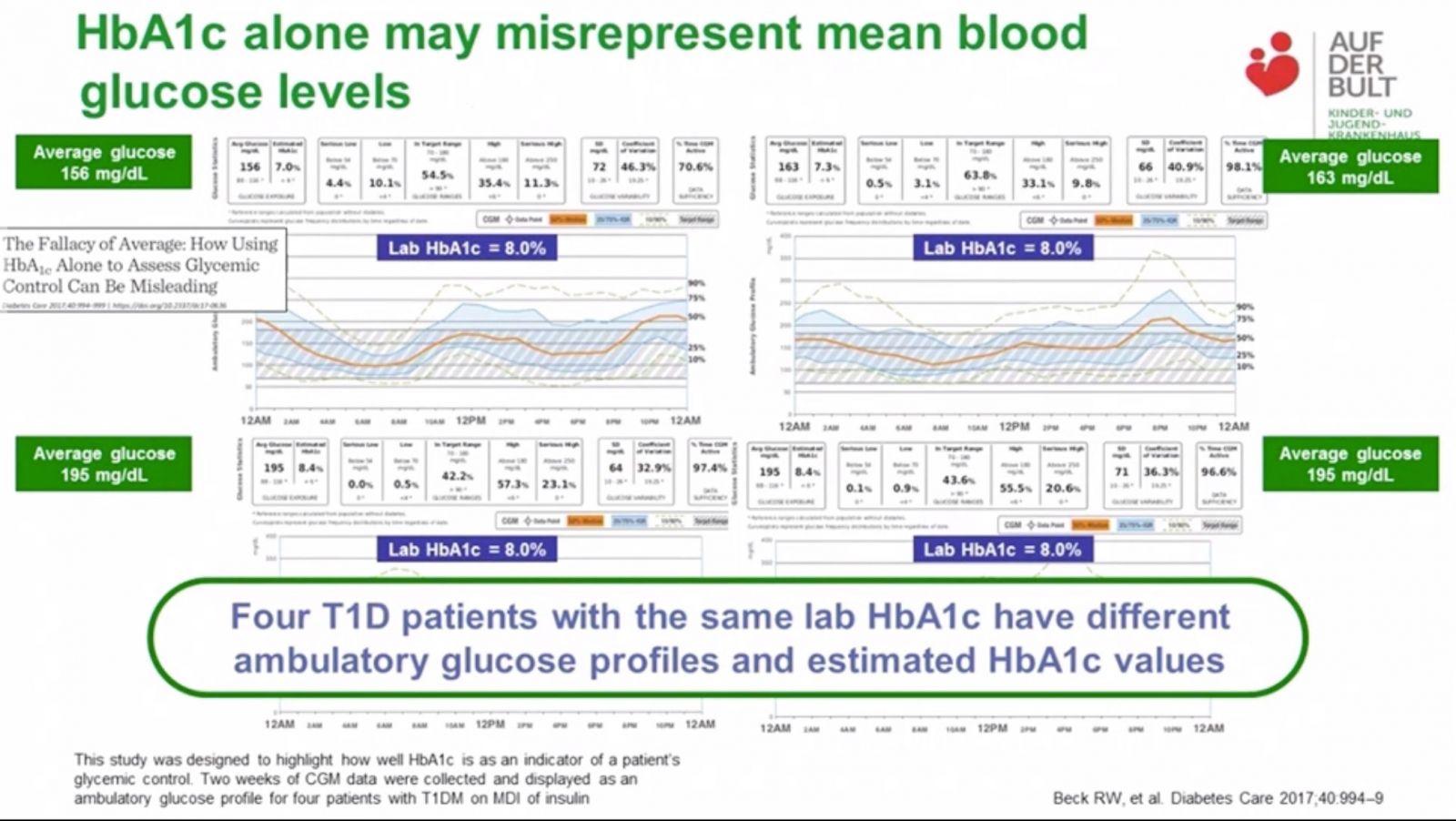 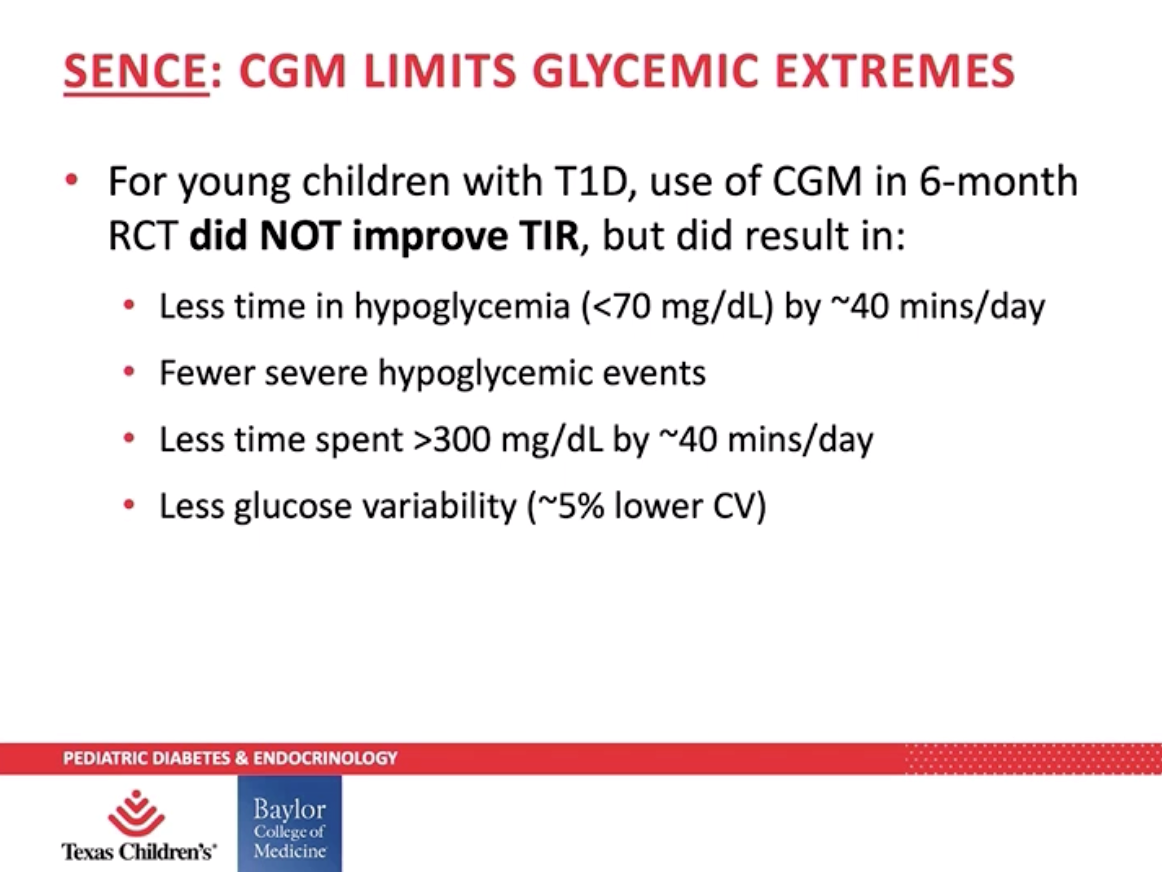 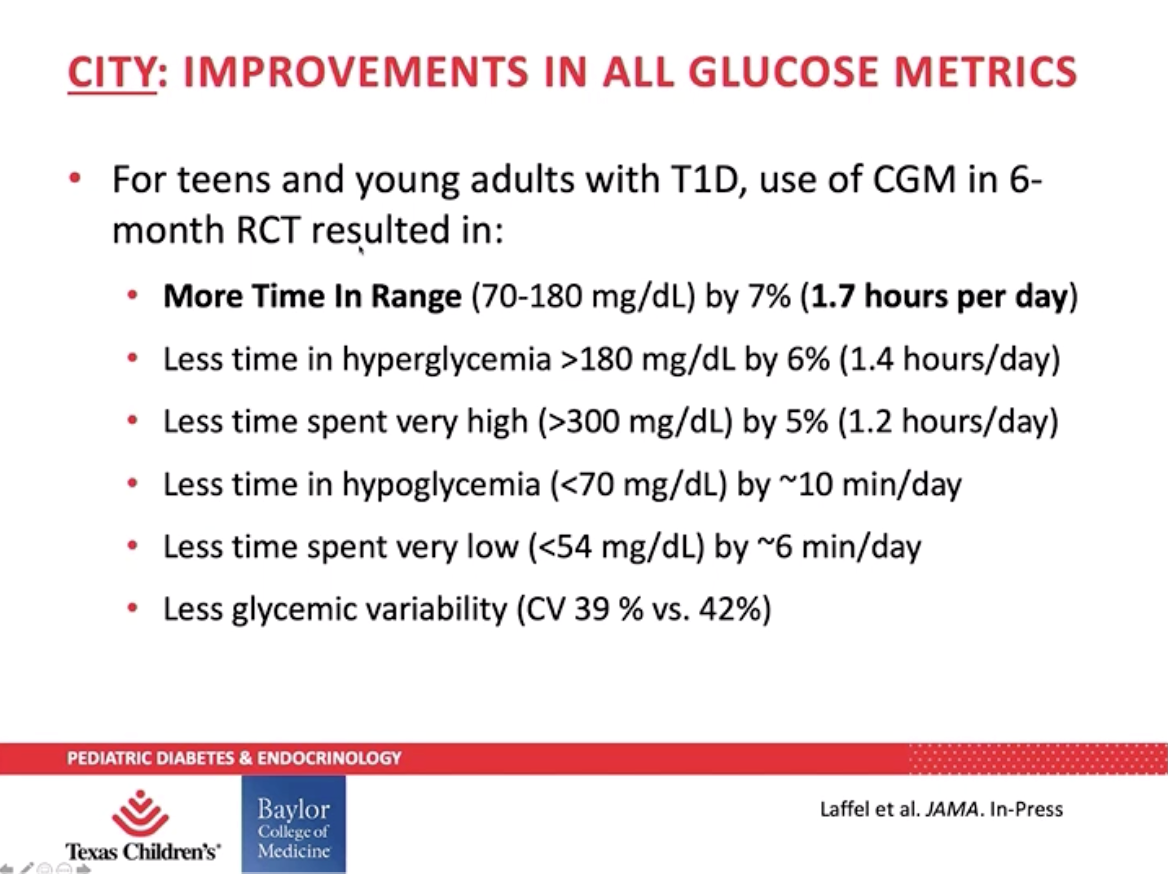 Though Dr. Danne acknowledged the issue of access and affordability, he believes CGM use will continue to increase among children who are tech savvy. Dr. Daniel DeSalvo presented data from the SENCE and CITY to further support use of CGM among children with type 1 diabetes. Young children (two to seven years old) enrolled in the SENCE study saw their hypoglycemia (blood glucose under 70 mg/dL) and time spent over 300 mg/dL reduce by 40 minutes per day – that’s nearly five hours a week. Teens and young adults (ages 14 to 24) in the CITY study saw a 7% increase in time in range, which is almost two more hours per day spent in range – 100 minutes, to be exact!

Professor Rebecca Myerson (from the University of Wisconsin) shared key findings of a study on the impact of Medicaid expansion for people with diabetes:

Dr. Kasia Lipska from Yale School of Medicine discussed the importance of coverage for essential medicines and pre-existing conditions – two health policy issues that are front of mind for many Americans as the November election approaches. In addition to Medicaid expansion, the Affordable Care Act (ACA, or Obamacare) provided coverage for “Essential Health Benefits,” which includes prescription drugs, mental health services, emergency services and hospital care, preventive services and chronic disease management, and more. Dr. Lipska shared a study that found the ACA reduced the percent of income spent on family medical costs for people ages 18-64 with diabetes. This reduction was especially true for people whose family income was in the lowest bracket ($0-34,999 per year). 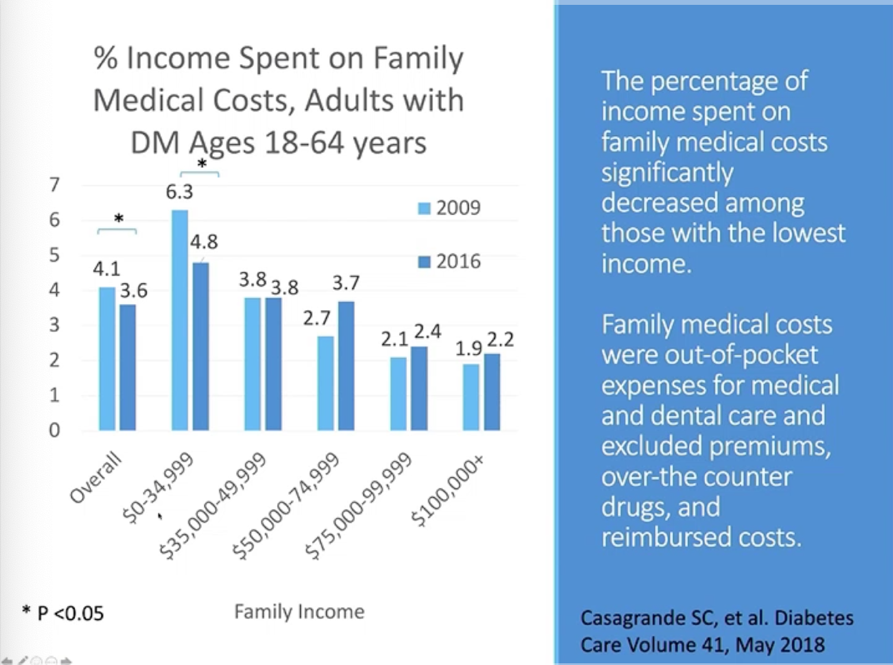 Importantly, ACA also prohibited health insurance companies from denying people coverage or charging higher costs to people who have “pre-existing conditions,” including diabetes. Given the significant improvements in coverage and care, Dr. Lipska emphasized that getting rid of the pre-existing conditions provisions would be “a disaster for people with diabetes” – presumably diaTribe readers in the US would agree! Over half of those surveyed were in favor of expanding Medicaid programs in their state – this doesn’t surprise us, since there are so many states that do not have favorable diabetes care programs (for example, see our article on CGM coverage for people on Medicaid; although this was not part of the ACA, many cite it as helping improve care quickly for those that are able to access the benefit). She shared results of a Kaiser Family Foundation survey that emphasized the need for ACA provisions: 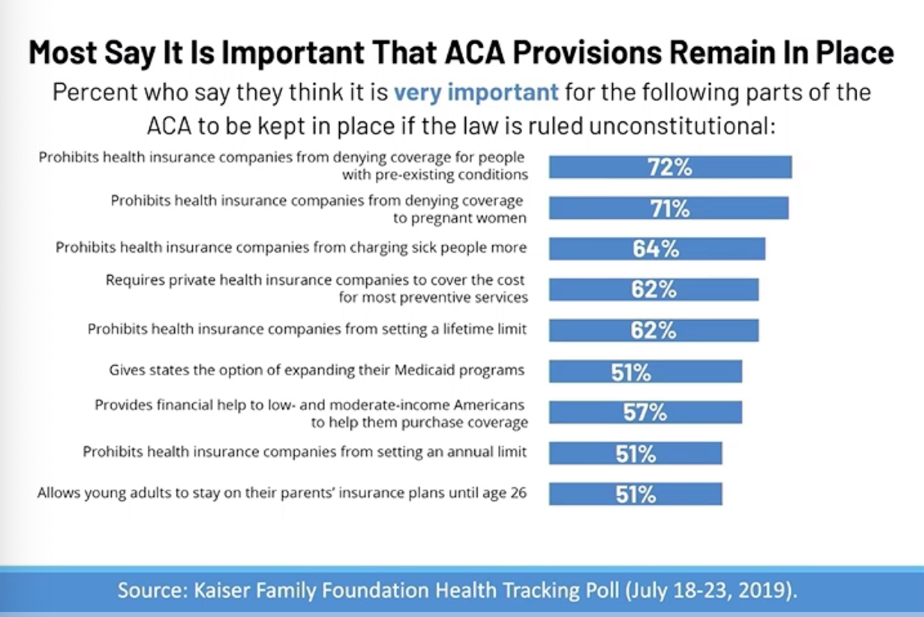 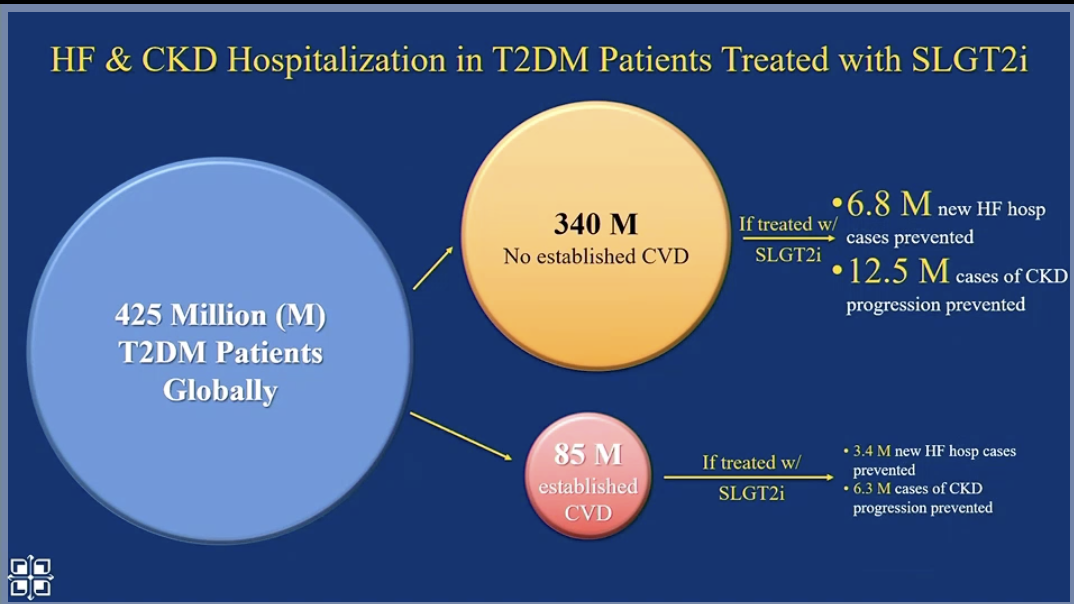 Next, Dr. Kosiborod looked at the population level. Worldwide, primary prevention with SGLT-2s and GLP-1s will significantly reduce cardiovascular events (compared to secondary prevention alone) because there are many people who are not diagnosed with CVD. 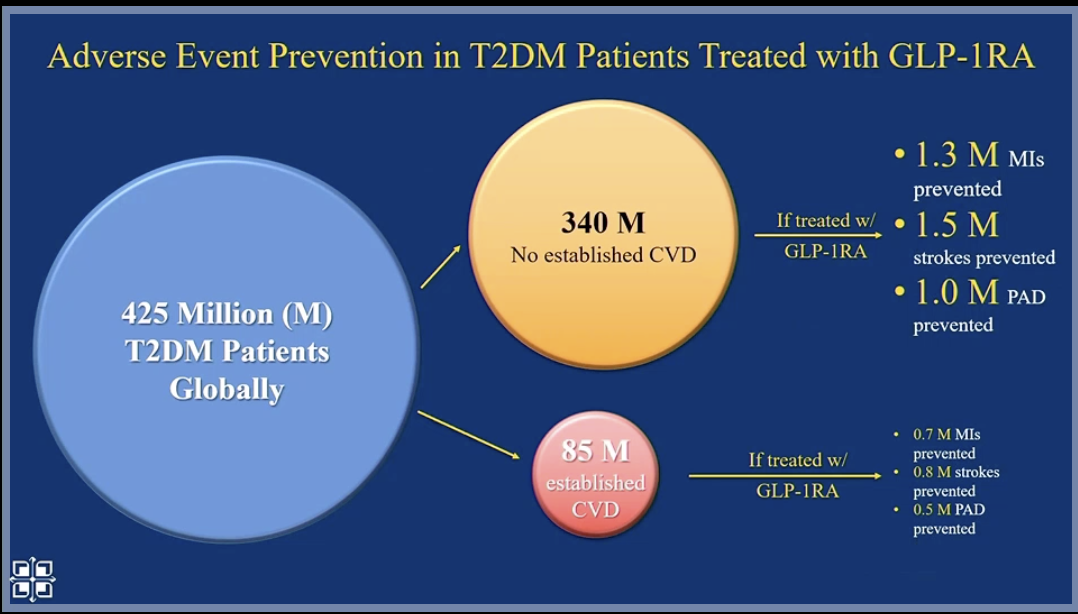 Dr. Kosiborod believes this primary prevention is cost-effective and essential, given the high risk to the population. And many SGLT-2s and GLP-1s will become generic in the future.

Dr. McGuire argued that we are not ready for SGLT-2s and GLP-1s to be used in primary prevention. He pointed to a meta-analysis that showed no benefit of SGLT-2 inhibitors and GLP-1 agonists in atherosclerotic cardiovascular disease (ASCVD) outcomes compared to placebo in people without established ASCVD. In his analysis of REWIND, Dr. McGuire pointed to an absolute risk difference of 0.3% in people without established CVD taking Trulicity versus placebo (1.7 events for every 100 patient years, vs. 2.0 events for every 100 patient years). This would mean that you would need to treat 333 people without CVD to prevent one MACE – which would be $3.4 million in drug costs.

Both speakers agreed that SGLT-2 inhibitors have shown strong effects in primary prevention for heart failure and kidney outcomes. There was no significant debate on this point, as the data speak for themselves regarding the profound effect of SGLT-2 treatment in reducing these outcomes.

Weekly Basal Insulin – The Wave of the Future?

Prof. Home explained that weekly insulin could reduce hurdles in starting or maintaining insulin therapy for people with diabetes, especially those who are:

Weekly insulin could help people adhere to their prescribed therapy – but it will likely make dose titration and adjustments more challenging. One of the major challenges of weekly insulin is that people can’t modify insulin doses according to life disruptions (for example, sick days or increased physical activity).

Dr. DeVries and Dr. Del Prato reviewed the various weekly insulins that companies are studying to evaluate their safety and how they affect diabetes outcomes in comparison to existing insulins. Dr. Del Prato highlighted results from a recent study that compared Novo Nordisk’s weekly insulin (icodec) to Glargine U100 (Lantus) in people with type 2 diabetes:

Research is still to come on weekly basal insulin, but it looks promising.

Michelle Passaretti (Geisinger Health System) presented data on the success of the Fresh Food Farmacy initiative. Fresh Food Farmacy was developed to meet the health needs of people with diabetes in Pennsylvania who do not have access to healthy foods (also known as being food insecure). diaTribe interviewed two leaders from Geisinger in 2018, Dr. Andrea Feinberg and Allison Hess; now, Fresh Food Farmacy has provided 482,219 total meals.

The data speaks to the power of food as medicine! The program participants had a:

Compared to eligible individuals who did not participate, Fresh Food Farmacy participants saw: